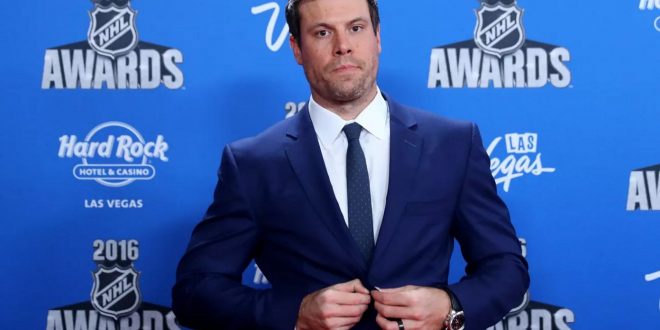 Shea Weber has arrived in Montreal, and with that arrival comes our first look at him in the Bleu, Blanc et Rouge.

It was more than a month ago that the Nashville Predators traded their former captain to the Candiens for defenseman P.K. Subban, but Monday was the first time he showed up in his new professional home.

His new team Tweeted out details of his day, including a photo shoot in his new jersey and a workout with Montreal’s strength and conditioning coach. His jersey included a familiar number (6) as well as an ‘A,’ indicative of an alternate captain. Max Pacioretty just completed his first season as Montreal’s captain.

Weber also answered questions from fans in a social media chat and signed a handful of jerseys and T-shirts that will be used as prizes in fan contests in the coming days and weeks.

Tuesday, he will attend a charity golf event, at which he will meet the Montreal media for the first time.

“I’ve known him for a few years now and he’s a very strong character guy,” goalie Carey Price told TSN. “He’s going to bring a lot to our hockey team. I’m definitely happy to have a guy like that in front of me. Like I said, he’s a big presence on the ice and off the ice. He makes it difficult to play against every night and I’m looking forward to seeing him in front of me, that’s for sure.”

Web articles – via partners/network co-ordinators. This website and its contents are the exclusive property of ANGA Media Corporation . We appreciate your feedback and respond to every request. Please fill in the form or send us email to: [email protected]
Previous: Emerald Ash Borer Has Arrived In Philadelphia, Deadly To Ash Trees
Next: Dwayne Johnson The Rock is furious at some of his ‘Fast 8’ co-stars