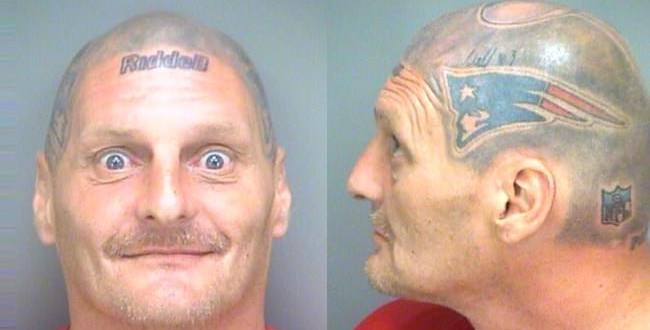 Victor Thompson patriots fan arrested on drugs charges has raised eyebrows across the world – but not just for his alleged crimes.

Police mug shots of American Football fan show his head has been completely tattooed to resemble the helmet of his New England Patriots hero Tom Brady.

Clearly, Thompson didn’t mess around when he got inked. Not only does the helmet’s brand, Riddell, appear on his forehead, but there is also an NFL logo, an American flag and even a green dot, which appears on helmets that are electronically equipped, inked to the back of his head.

Thompson also has a Super Bowl trophy along with what we’re guessing (hoping?) are re-created autographs from Wes Welker, Rob Gronkowski and Randy Moss tattooed across his dome. Hopefully for Thompson, the jurors and the judge involved in this case in Florida aren’t Miami Dolphins fans.

Web articles – via partners/network co-ordinators. This website and its contents are the exclusive property of ANGA Media Corporation . We appreciate your feedback and respond to every request. Please fill in the form or send us email to: [email protected]
Previous: Anisa Salmi Wins Fight to Have Private Photos Removed from “The Dirty”
Next: Senator John Walsh’s degree revoked