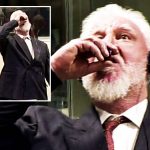 Slobodan Praljak drank from bottle moments after judges upheld 20-year sentence in The Hague. The United Nations court in The Hague has confirmed that a Bosnian Croat war crimes defendant died shortly after taking what he said was poison upon hearing his appeal of a 20-year sentence had been rejected. A spokesman for the International Criminal Tribunal for the Former ... END_OF_DOCUMENT_TOKEN_TO_BE_REPLACED