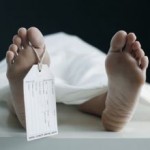 Thomas Sancomb, A man who was pronounced dead after collapsing at his flat began to move as he was transported to the mortuary. The girlfriend of Thomas Sancomb, 46, had not been able to reach him for two days, and called police asking for an officer to check on him. END_OF_DOCUMENT_TOKEN_TO_BE_REPLACED