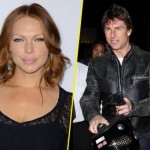 Tom Cruise and Laura Prepon may be dating according to this report. They’ve apparently known each other for a while but Tom became interested after watching Orange Is the New Black (read: that opening shower scene). He took her on a date at The Manor Hotel in LA, a place Scientologists like to dine at, and even picked her up ... END_OF_DOCUMENT_TOKEN_TO_BE_REPLACED

With the Christopher McQuarrie-helmed Mission: Impossible 5 now officially set for release on December 25, 2015, the time has come for the sequel’s cast to begin to assemble. While promoting the Blu-ray release of his latest, The World’s End, Simon Pegg confirmed to MTV that he’ll be reprising his role as Benji Dunn opposite Tom Cruise’s Ethan Hunt. END_OF_DOCUMENT_TOKEN_TO_BE_REPLACED