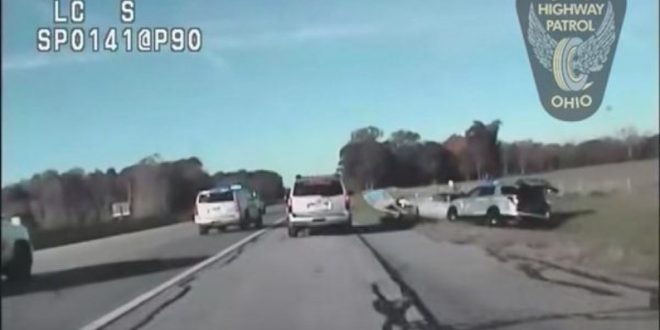 A 10-year-old boy stole his family’s car and lead his parent and police on a chase that reached speeds near 100 mph.

Authorities say no one was injured during the pursuit that began around 9:30am Thursday when Westlake police saw a car speed by chased by another vehicle, possibly driven by the boy’s mother, on Interstate 90 west of Cleveland.

Per the AP, a man called 911 and reported the boy’s car, a 2004 Toyota Avalon, was swerving in and out of traffic and had almost run several vehicles off the road; he also said a woman was following that car in a red SUV. Three Westlake officers followed the Toyota for more than 15 miles at high speeds until the boy drove through a tollbooth and entered the westbound lanes of the Ohio Turnpike, per a police rep.

And that’s when at least four state troopers joined the chase, says Highway Patrol Sergeant Tim Hoffman, attempting a roadblock as the boy drove erratically on the turnpike at speeds up to 100mph. After a 20-mile pursuit, the boy slowed down and veered onto the grassy berm to avoid driving over stop sticks—which is when one trooper nudged the boy’s car at a slow speed into a mile post sign with his cruiser, and another cruiser blocked the car and prevented it from re-entering the road, Hoffman says.

A Cleveland police report shows the boy was previously arrested for stealing his mom’s 2013 Dodge Charger on Oct. 16. This time, he was taken to a hospital with a legal guardian and will be placed in the custody of Erie County child services after being evaluated; no word yet on possible criminal charges.

Web articles – via partners/network co-ordinators. This website and its contents are the exclusive property of ANGA Media Corporation . We appreciate your feedback and respond to every request. Please fill in the form or send us email to: [email protected]
Previous: Crashed alien spacecraft spotted on Mars?
Next: Researchers Explain ‘Scratch Marks’ on Mars