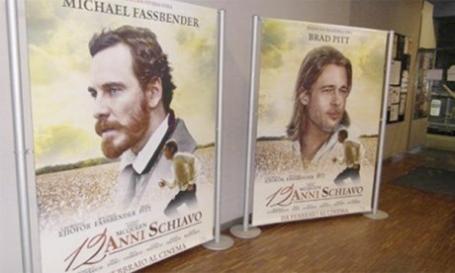 Lionsgate and Italian film distributor BIM Distribuzine are doing damage control after a marketing campaign for the Italian release of 12 Years a Slave caused a fury among many in the blogosphere.

The companies have apologized for omitting the film’s Black actors — including leading man Chiwetel Ejiofor — from the film’s posters, favoring Brad Pitt (who has only a minor role in the film) and Michael Fassbender instead.

Lionsgate, acting through its Summit subsidiary, labelled the offending material rogue and said it was doing its best to have it withdrawn.

A spokesperson for the company told Variety: “The 12 Years A Slave theatrical posters featuring Brad Pitt and Michael Fassbender that were recently released in Italy were unauthorised and were not approved by any of the producers or licensors of the film”.

“Summit Entertainment, acting as exclusive sales agent for the licensors, is investigating and taking immediate action to stop the distribution of any unauthorised posters and to have those posters currently in the marketplace recalled.”

Directed by Steve McQueen and co-starring Michael K. Williams, Quvenzhané Wallis and Scoot McNairy, 12 Years A Slave will open in the UK on 10 January 2014.

Web articles – via partners/network co-ordinators. This website and its contents are the exclusive property of ANGA Media Corporation . We appreciate your feedback and respond to every request. Please fill in the form or send us email to: [email protected]
Previous: Celebrity: Amber Rose Flaunts Post-Baby Body On Instagram (PHOTO)
Next: Woman,64, found dead in east-end apartment