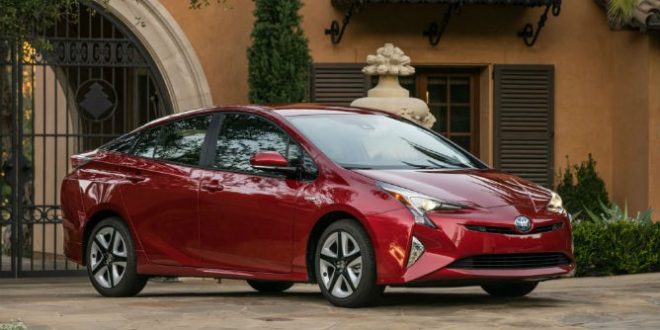 The Toyota Prius is the granddaddy of all green machines. It’s been the hybrid gold standard for nearly 20 years.

Only one significant change for the 2016 model year: Toyota has added a Safety Sense-C group of electronic active-safety systems. Included are lane-departure assist, pre-collision braking, and automatic high beams.

Officially considered a subcompact, the Prius c is actually longer than many entrants in that size segment. Interior volume stemming from those exterior dimensions makes the Prius c truly capable of seating four adults. Assembly quality has been good, too.

Under the hood of the tiniest Prius, its 1.5-liter four-cylinder engine produces a modest 73 horsepower, coupled to a more compact hybrid-powertrain system than the one used by the two larger Prius models. Working together, the gas engine and twin motor-generators have a combined output of 99 horsepower. Engineers even managed to position both the 0.9 kWh lithium-ion battery pack and the gasoline tank below the back seat.

The Insurance Institute for Highway Safety gives the 2016 Prius c an Acceptable rating for its rigorous new small-overlap test. The Prius c scored Good on each of the insurance-industry agency’s other tests. The federal government’s National Highway Traffic Safety Administration gave the 2015 Prius c a four-star score in each of its tests.

2016-priusc-profileSize isn’t the only visual difference between the Prius c and the bigger Prius Liftback. The subcompact Prius c lacks the two-piece back window that has been a regular-Prius hallmark for the past dozen years, despite its effect on rearward visibility. The Prius c has a more conventional, vertical rear end: an ordinary top-hinged hatchback, set between tall vertical taillamps. A long roof spoiler is intended to reduce fuel-wasting air turbulence at highway speeds.

2016-priusc-interiorInside, the Prius c looks more conventional than the larger Prius Liftback. 2015’s trim upgrade, using higher-level plastics and fabrics, still doesn’t match the quality of the Prius. Painted metal can even be seen in portions of what must be called an economy-car interior.

Front seats are about the same as in older Prius models: thin, but adequately comfortable. Two six-foot adults can fit in the rear without excessive scrunching.

The familiar Prius hallmark, a multi-information display at the dashboard center, below the windshield, remains the focal point. Dashboard switches, however, are conventional in appearance. Instead of the stubby, idiosyncratic gear selector in the regular Prius, the Prius c has an ordinary lever atop the central tunnel.

2016-priusc-drivingOnly a few minutes behind the wheel are needed to affirm that the Prius c is hardly swift. But then, who expected it to be? Push it harder than customary, when necessary, and this subcompact will handily keep up with traffic. Be prepared to accept the inevitable noise produced by its small engine at full power, noting that not everyone is bothered by the sound.

A pushbutton-activated EV mode can keep the Prius c in full-electric drive at low speeds, but only for about half a mile. An Eco mode restricts power output and alters the climate-control settings, for even thriftier fuel usage; but forward progress becomes almost painfully slow. Even when driven with some enthusiasm, the Prius c is efficient. Reaching its 50-mpg EPA rating shouldn’t be difficult.

Agile and eager, the Prius c is ideal for breezing through urban traffic and slipping into tight parking spaces. Though not sporty, the Prius c scores highly as a small, maneuverable hatchback.

2016-priusc-finalPrius c lags in refinement, but its maneuverability and practicality are in accord with rivals of its size. A base price around $20,000 yields the highest gas mileage rating of any car with plug-in capability.

Web articles – via partners/network co-ordinators. This website and its contents are the exclusive property of ANGA Media Corporation . We appreciate your feedback and respond to every request. Please fill in the form or send us email to: [email protected]
Previous: Two dead, 14 to 16 wounded in shooting at Florida nightclub (Video)
Next: Singer Ariana Grande Reveals New Bangs on Instagram