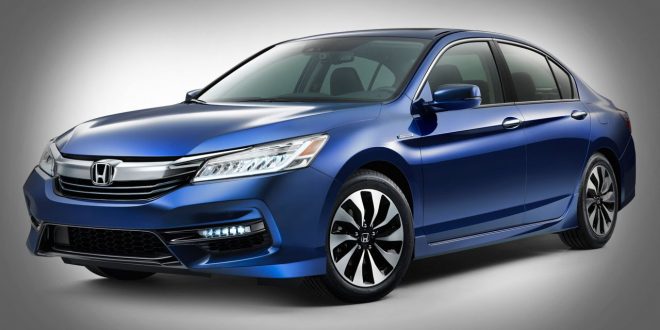 After sitting out a year, the Honda Accord Hybrid returns for 2017 with more power, more standard safety and tech options, and better efficiency. Regarding that last point, Honda asserts it is true in reality if not on paper.

The 2017 Accord Hybrid will sell to people who want a midsize sedan that also happens to get stellar MPG figures, perhaps those who remember the days when you could barely see Los Angeles. But it has to compete against the leader of the midsize sedan class, which happens to be the less-expensive and also frugal Accord four-cylinder.

The Accord is already steeped in efficiency. Remember, the original Accord debuted 40 years ago with Honda’s emissions-standard-busting CVCC engine.

As in the 2014 Accord Hybrid, a 2.0-liter Atkinson-cycle four-cylinder is mated to an electric motor. But Honda has cranked out more power thanks to friction reductions and other changes, to get a combined output of 212 horsepower. That’s 27 more than most four-cylinder Accords have.

The result is acceleration that at least feels as good from the driver’s seat one of its bread-and-butter brethren. Anyone who’s driven automatic Accords for the last couple of decades shouldn’t complain. This, despite a roughly 150-pound weight penalty over a similarly equipped Accord EX.

Instead of a traditional CVT or automatic transmission, the Accord Hybrid continues to use an engine lock-up clutch that sits between the engine and two electric motors to put the power down on the road. At speed, it works with the electric power to become essentially a single-speed drive unit as on many EVs. That means acceleration is quiet and progressive in EV Drive (speeds of up to 30 mph or so, or activated by a button on the console) and at highway speeds when you’re in one of the other two modes – Hybrid Drive and Engine Drive. In all other situations, it sounds a lot like a CVT – and not a great one at that. From startup or a dead stop from a light, the powertrain drones as in many four-cylinder hybrids and it doesn’t sound pleasant at all. Pushing the Sport button behind the gear lever doesn’t help the noise problem, eit requires less pressure on the right pedal to get up to speed.

A shame, because in all other respects it feels just like a normal Accord to drive and that’s some of the best praise any car in this class can get. The electric power steering assist in Hondas continues to improve, but this may be one of the best examples in any hybrid. The brakes are reasonably predictable in feel, too.

And then there’s the fuel economy. Honda says it lost its 50 mpg rating from the previous Hybrid because of new EPA fuel economy measures for 2017, so the rating is down one to 49 in the city. Highway MPG, however, is up two to 47 and the combined rating is 48. That’s at the top of the midsize sedan class and very close to the 2016 Toyota Prius’ 54/50 rating.

Having said that, the mileage on the trip computer during our mountain roads and highway drive from Napa, California to the University of California, Davis campus and back pushed into the upper 40s, but not 48. And the city driving fell well short of 49. But a 15.8 gallon fuel tank means even if you average 45 mpg, runs of 700 miles between bathroom breaks are doable.

Tell your friends they should’ve gone before they got in the car.

The 2017 Hybrid gets the same upgrades as the rest of the 2016 Accord line did. Not that you’d notice right away: Acura-like LED headlights are available on top Touring models and there are blue accents on the lenses because blue is still the new green, apparently. The 2014’s 17-inch hybrid-specific wheels carry over, which now just serve to show that the Accord looks better with the 19s offered on Sport and Touring models.

Aside from a pair of digital displays for energy monitoring and fuel flanking the speedometer (which also incorporates another power flow monitor), the interior is standard Accord fare, too. That’s good news indeed, because it doesn’t take long to appreciate how well-packaged the Accord is. It’s not a small car from the outside, but tall glass makes it feel particularly spacious inside and a genuine five-passenger sedan.

On the downside, trunk capacity has shrunk from 15.8 to 13.7 cubic feet because of the battery pack mounted back there, plus you also lose the folding rear seat. At least it remains a usefully square space with a large opening.

Honda wants to consider the Accord Hybrid the technological showcase of the line, which is why all of the hybrids come standard with the Honda Sensing suite of safety assistance features such as lane keep assist, adaptive cruise control, forward collision warning and road departure mitigation. Consider about 25 percent of 2016 Accord buyers have opted for Honda Sensing, according to a Honda spokesman, and making it standard on the hybrids is a somewhat bold move.

The LaneWatch camera is also standard, but the Accord Hybrid doesn’t incorporate the stop-and-go adaptive cruise offered on the 2016 Civic, which seems like a technological oversight. You also have to spring for an EX-L or Touring hybrid (the top two of the three Hybrid grades offered) for Apple CarPlay and Android Auto, but that means base Hybrid models get a far easier to use knobs-and-buttons arrangement for audio controls.

That’s one piece of technology that probably doesn’t need to be showcased.

Web articles – via partners/network co-ordinators. This website and its contents are the exclusive property of ANGA Media Corporation . We appreciate your feedback and respond to every request. Please fill in the form or send us email to: [email protected]
Previous: Scientists produce world’s first wood bison using in vitro fertilization
Next: Ontario man charged for driving high with baby in car, Report