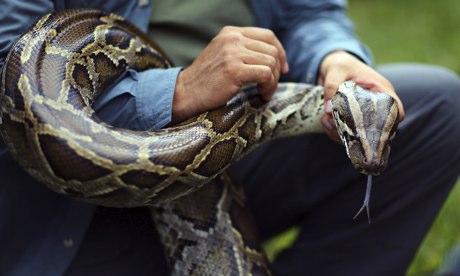 Ambar Arianto Mulyo, 59, a security guard was strangled by a 15ft long python in front of a luxury Bali hotel as terrified onlookers looked on.

The man’s death came as he volunteered to help capture the python which had been spotted several times near the hotel in Bali’s Sanur district.

The python had been spotted several times previously near the hotel, which is closed for renovations until 2015, in the Sanur area.

Mr. Mulyo first managed to secure the python’s head and tail and put it on his shoulders, but the snake then wrapped itself around his body and proceeded to strangle him to death, said Mr. Bawa.

People who were watching the incident were unable to do anything to help and called the police. They came but were also unable to save the man, said reports.

Friends who were with the man were too terrified to do anything to help, said Gusti Ngurah Yudistira, the head of the police criminal investigations unit.

“The victim died on the spot as his neck was crushed and he could not breathe,” said Gusti.

“It happened so fast,” said Bawa. “We were sad because we could not do anything to help him.”

The python then escaped into the nearby bushes. The police searched the hotel and the surrounding grounds, but failed to track down the snake.

“We urge residents and tourists to stay on the alert,” said Gusti.

Web articles – via partners/network co-ordinators. This website and its contents are the exclusive property of ANGA Media Corporation . We appreciate your feedback and respond to every request. Please fill in the form or send us email to: [email protected]
Previous: Head Trauma Lead to Alzheimer’s Disease, Study
Next: Rapper Doe B Dead At 22 After Shooting