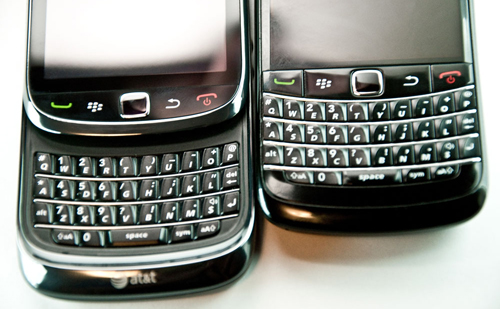 Blackberry says it will continue to be a smartphone brand, after announcing it would end in-house development of devices.

Alex Thurber, who is in charge of devices at the company, told the BBC that a new handset featuring a physical keyboard would be released within six months.

It’s been an open secret that BlackBerry has at least one more smartphone with a keyboard that hasn’t been released.

But chairman and CEO John Chen said last week that he hadn’t decided whether it would be brought to market.

The company’s senior vice-president for global device sales, Alex Thurber, was less vague in his interview with BBC.

“There will still be a keyboard-based BlackBerry device, designed and distributed within the next six months,” he said.

“I think there’s a demand for keyboard phones. As we’ve been showing mockups of what we’ve been working on, to our carrier and distributor partners, they are very excited about this,” Thurber said in the three-minute video.

He addressed confusion about whether BlackBerry smartphones will disappear or continue to be available after in-house design and development ceases by the end of the company’s 2017 financial year on Feb. 28.

“We’ll now be working with partners to take our software onto their hardware. So there will continue to be BlackBerry-branded devices for sale all over the world,” Thurber said.

The only such partnership announced is with a joint venture company that will primarily make BlackBerrys for the Indonesian market.

The keyboard phone is expected to be a DTEK model. The first DTEK — a touch-screen device using a BlackBerry version of the Android operating system — began shipping in August.

Web articles – via partners/network co-ordinators. This website and its contents are the exclusive property of ANGA Media Corporation . We appreciate your feedback and respond to every request. Please fill in the form or send us email to: [email protected]
Previous: Lawson Study: “Early marijuana use may disrupt brain function, lower IQ”
Next: Bigfoot caught on camera? Eagle Cam Captures ‘Unknown Figure’ Under Nest (Video)