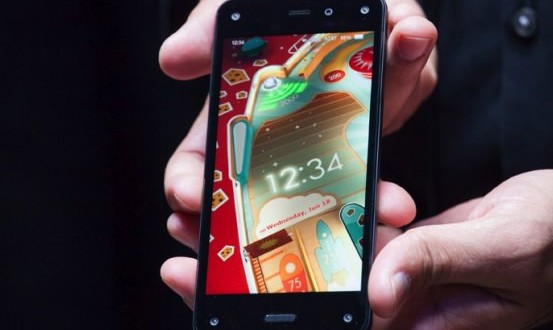 Amazon dives into the smartphone game with the Friday release of Fire — a device that doesn’t let you stray far from the e-tailer.

“We can’t wait for customers to experience Amazon Fire for themselves. Fire offers an amazing value for customers with innovative features like Dynamic Perspective and Firefly, access to Amazon-exclusive content and services, including Mayday, ASAP and more –plus premium hardware with 32 GB of memory –twice the amount leading competitors offer, as well as free, unlimited photo storage in the Amazon Cloud and 12 months of Amazon Prime included.”

To persuade customers, Amazon has bundled free 12-month subscription to Amazon Prime and 1,000 Amazon Coins (worth $10) to use on apps, games and in-app purchases.

“Fire pushes the boundaries of innovation, and is easy-to-use. Amazon has a vast content ecosystem that consumers know and love. AT&T has built a reputation of offering innovative devices with great pricing options – all on the nation’s most reliable 4G LTE network. Together, we’re thrilled to offer a device that will be as dynamic as its name.”

Amazon announced the Fire Phone as its first smartphone in June to take on all the market leaders. The Fire Phone comes with features such as Firefly integration and a 3D UI, called Dynamic Perspective. On the specifications side, the smartphone has a 4.7-inch HD IPS display, 2.2GHz quad-core Qualcomm Snapdragon processor, 2GB of RAM, 32GB/64GB storage and 13-megapixel rear camera.

Alongside mid-range specifications, the Fire Phone has certain unique features that distinguish it from the competition. In this regard, the smartphone has total four speakers on the front and its back and has four camera sensors on the front to enable 3D experience on the interface by judging the head movement of the users.

Web articles – via partners/network co-ordinators. This website and its contents are the exclusive property of ANGA Media Corporation . We appreciate your feedback and respond to every request. Please fill in the form or send us email to: [email protected]
Previous: Cane corso dogs maul to death Michigan jogger (Video)
Next: Boy battling cancer gets close to 100K birthday cards