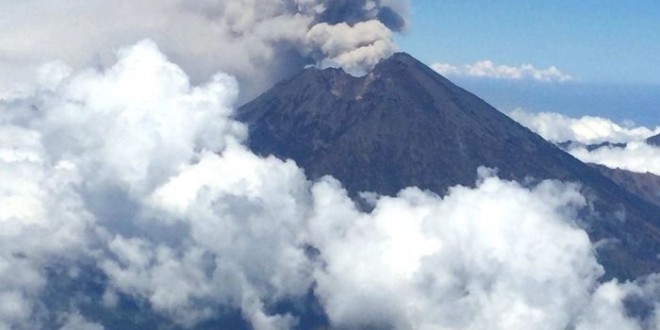 Bali airport will remain closed until Friday due to ash erupting from a nearby volcano, Indonesian officials said, grounding hundreds of flights for a second consecutive day.

Mount Rinjani blasted ash and debris almost 11,500 feet into the air on Wednesday, according to a spokesman from the National Disaster Mitigation Agency.

The eruption shut down flights at the Ngurah Rai international airport in Bali, about 135 kilometers (84 miles) from Lombok, and the Selaparang airport in Mataram, the capital of West Nusatenggara province, located on Lombok Island.

The Blimbingsari airport in Banyuwangi on the eastern end of main Java Island has also been closed, the Ministry of Transportation said.

The closure of the airports affected a total of 692 international and domestic flights, which were either cancelled or delayed.

Airlines have been told to avoid routes near the mountain and a decision about reopening the airports will be made early on Thursday, ministry spokesman Julius Barata confirmed.

Rinjani is among around 130 active volcanoes in Indonesia.

The archipelago is prone to volcanic eruptions and earthquakes because of its location on the Pacific ‘Ring of Fire’, a series of fault lines stretching from the Western Hemisphere through Japan and Southeast Asia.

Web articles – via partners/network co-ordinators. This website and its contents are the exclusive property of ANGA Media Corporation . We appreciate your feedback and respond to every request. Please fill in the form or send us email to: [email protected]
Previous: Ottawa councillors approve six-month limit for roadside memorials
Next: Online Therapy Eases New Doctor’s Suicidal Thoughts, new study says