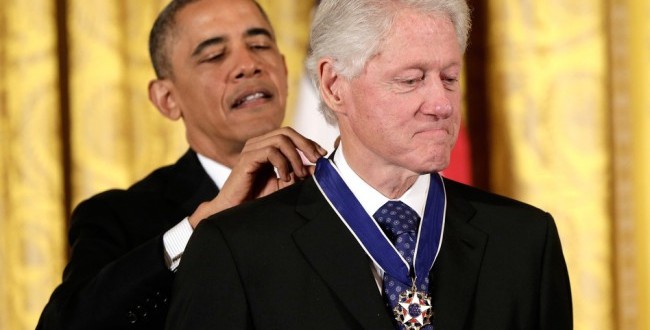 A former president, a baseball legend, a country music star and a woman who’s a powerhouse in American media were among 16 people honored Wednesday at the White House with the nation’s highest civilian honor, the Presidential Medal of Freedom.

The 42nd president, Bill Clinton, joined Chicago Cubs hall of famer Ernie Banks, singer Loretta Lynn, media mogul and talk show host Oprah Winfrey and 12 others being honored. It was the 50th anniversary of the award’s creation. According to the White House, “more than 500 exceptional individuals from all corners of society” have over the decades since received the award.

The 16 honorees and their accomplishments (as described by the White House):

Known to many as “Mr. Cub,” Ernie Banks is one of the greatest baseball players of all time. During his 19 seasons with the Chicago Cubs, he played in 11 All-Star Games, hit over 500 home runs, and became the first National League player to win Most Valuable Player honors in back-to-back years. He was elected to the Baseball Hall of Fame in 1977, his first year of eligibility.

Ben Bradlee is one of the most respected newsmen of his generation. During his tenure as executive editor of The Washington Post, Mr. Bradlee oversaw coverage of the Watergate scandal, successfully challenged the Federal Government over the right to publish the Pentagon Papers, and guided the newspaper through some of its most challenging moments. He also served in the Navy during World War II.

President Clinton was the 42nd President of the United States. Before taking office, he served as Governor and Attorney General of the State of Arkansas. Following his second term, President Clinton established the Clinton Foundation to improve global health, strengthen economies, promote health and wellness, and protect the environment. He also formed the Clinton-Bush Haiti Fund with President George W. Bush in 2010.

Daniel Inouye was a lifelong public servant. As a young man, he fought in World War II with the 442nd Regimental Combat Team, for which he received the Medal of Honor. He was later elected to the Hawaii Territorial House of Representatives, the United States House of Representatives, and the United States Senate. Senator Inouye was the first Japanese American to serve in Congress, representing the people of Hawaii from the moment they joined the Union.

Daniel Kahneman is a pioneering scholar of psychology. After escaping Nazi occupation in World War II, Dr. Kahneman immigrated to Israel, where he served in the Israel Defense Forces and trained as a psychologist. Alongside Amos Tversky, he applied cognitive psychology to economic analysis, laying the foundation for a new field of research and earning the Nobel Prize in Economics in 2002. He is currently a professor at Princeton University.

Richard Lugar represented Indiana in the United States Senate for more than 30 years. An internationally respected statesman, he is best known for his bipartisan leadership and decades-long commitment to reducing the threat of nuclear weapons. Prior to serving in Congress, Senator Lugar was a Rhodes Scholar and Mayor of Indianapolis from 1968 to 1975. He currently serves as President of the Lugar Center.

Loretta Lynn is a country music legend. Raised in rural Kentucky, she emerged as one of the first successful female country music vocalists in the early 1960s, courageously breaking barriers in an industry long dominated by men. Ms. Lynn’s numerous accolades include the Kennedy Center Honors in 2003 and the Grammy Lifetime Achievement Award in 2010.

Mario Molina is a visionary chemist and environmental scientist. Born in Mexico, Dr. Molina came to America to pursue his graduate degree. He later earned the Nobel Prize in Chemistry for discovering how chlorofluorocarbons deplete the ozone layer. Dr. Molina is a professor at the University of California, San Diego; Director of the Mario Molina Center for Energy and Environment; and a member of the President’s Council of Advisors on Science and Technology.

Sally Ride was the first American female astronaut to travel to space. As a role model to generations of young women, she advocated passionately for science education, stood up for racial and gender equality in the classroom, and taught students from every background that there are no limits to what they can accomplish. Dr. Ride also served in several administrations as an advisor on space exploration.

Bayard Rustin was an unyielding activist for civil rights, dignity, and equality for all. An advisor to the Reverend Dr. Martin Luther King, Jr., he promoted nonviolent resistance, participated in one of the first Freedom Rides, organized the 1963 March on Washington for Jobs and Freedom, and fought tirelessly for marginalized communities at home and abroad. As an openly gay African American, Mr. Rustin stood at the intersection of several of the fights for equal rights.

Arturo Sandoval is a celebrated jazz trumpeter, pianist, and composer. Born outside Havana, he became a protégé of jazz legend Dizzy Gillespie and gained international acclaim as a dynamic performer. He defected to the United States in 1990 and later became an American citizen. He has been awarded nine Grammy Awards and is widely considered one of the greatest living jazz artists.

Dean Smith was head coach of the University of North Carolina basketball team from 1961 to 1997. In those 36 years, he earned 2 national championships, was named National Coach of the Year multiple times, and retired as the winningest men’s college basketball coach in history. Ninety-six percent of his players graduated from college. Mr. Smith has also remained a dedicated civil rights advocate throughout his career.

Gloria Steinem is a renowned writer and activist for women’s equality. She was a leader in the women’s liberation movement, co-founded Ms. magazine, and helped launch a wide variety of groups and publications dedicated to advancing civil rights. Ms. Steinem has received dozens of awards over the course of her career, and remains an active voice for women’s rights.

C.T. Vivian is a distinguished minister, author, and organizer. A leader in the Civil Rights Movement and friend to the Reverend Dr. Martin Luther King, Jr., he participated in Freedom Rides and sit-ins across our country. Dr. Vivian also helped found numerous civil rights organizations, including Vision, the National Anti-Klan Network, and the Center for Democratic Renewal. In 2012, he returned to serve as interim President of the Southern Christian Leadership Conference.

Patricia Wald is one of the most respected appellate judges of her generation. After graduating as 1 of only 11 women in her Yale University Law School class, she became the first woman appointed to the United States Circuit Court of Appeals for the District of Columbia, and served as Chief Judge from 1986-1991. She later served on the International Criminal Tribunal in The Hague. Ms. Wald currently serves on the Privacy and Civil Liberties Oversight Board.

Oprah Winfrey is one of the world’s most successful broadcast journalists. She is best known for creating The Oprah Winfrey Show, which became the highest rated talk show in America for 25 years. Ms. Winfrey has long been active in philanthropic causes and expanding opportunities for young women. She has received numerous awards throughout her career, including the Bob Hope Humanitarian Award in 2002 and the Kennedy Center Honors in 2010.

Web articles – via partners/network co-ordinators. This website and its contents are the exclusive property of ANGA Media Corporation . We appreciate your feedback and respond to every request. Please fill in the form or send us email to: [email protected]
Previous: Best Buy : Great deals on the hottest holiday tech gifts
Next: Investing ideas for 2014 : 3 money-making investment