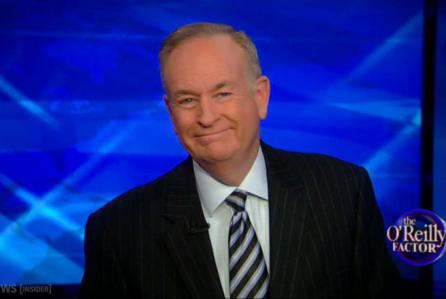 Bill O’Reilly Furious Over Accusation He Falsified War-Reporting In Falklands, Left-leaning publication Mother Jones alleged that O’Reilly falsely claimed to have been ‘in the war zone’ where he ‘survived combat’ while covering the 1982 war for CBS News.

Friday night, he attacked the story again on his show calling one of the authors, David Corn, a “liar,” as he asserted that everything he’s said about his reportorial career is true.

But Saturday, Eric Engberg, a retired CBS News correspondent who was in Argentina with O’Reilly in 1982 also covering the story for the network, posted his version of events on Facebook and they are decidely at odds on several points with O’Reilly.

Typical of Engberg’s thrust is this passage challenging O’Reilly calling the area of coverage in Buenos Aires a “war zone”: “It was not a war zone or even close. It was an expense account zone.”

Here’s some of what Enberg wrote:

Did Fox News bloviater Bill O’Reilly commit Brian Williams type fabrications when he claimed he had been in a “combat situation” while working as a reporter for CBS News during the Falklands War in 1982? Did he pad his resume’ as he was laying claim to personal knowledge about what happens in war? The issue has arisen because the “Mother Jones” magazine Washington bureau chief David Corn has written a story, largely based on recollections of CBS News senior staffers, comparing O’Reilly’s statements about his war experience to the fabrications which sent NBC anchor Williams into a six-month suspension.

I can provide some eyewitness information on this matter because I was one of the correspondents in Buenos Aires with O’Reilly and the rest of the rather large staff of CBS News people who were there “covering” the war. To begin with “covering” is an overstatement of what we were doing. Corn is correct in pointing out that the Falkland Islands, where the combat between Great Britain and Argentina took place, was a thousand miles away from Buenos Aires. We were in Buenos Aires because that’s the only place the Argentine military junta would let journalists go. Our knowledge of the war was restricted to what we could glean from comically deceitful daily briefings given by the Argentine military and watching government-controlled television to try to pick up a useful clue from propaganda broadcasts. We — meaning the American networks — were all in the same, modern hotel and we never saw any troops, casualties or weapons. It was not a war zone or even close. It was an “expense account zone.”

… O’Reilly has said he was in a situation in Argentina where “my photographer got run down and hit his head and was bleeding from the ear on the concrete and the army was chasing us.” The only place where such an injury could have occurred was the relatively tame riot I have described above. Neither Doyle [CBS Buenos Aires bureau chief Larry Doyle], who would have been immediately informed of injury to any CBS personnel, nor anyone else who was working the story remembers a cameraman being injured that night. No one who reported back to our hotel newsroom after the disturbance was injured; if a cameraman had been “bleeding from the ear” he would have immediately reported that to his superiors at the hotel. This part of O’Reilly’s Argentina story is not credible without further confirmation, and O’Reilly should identify the cameraman by name so he can be questioned about the alleged injury.

The gunfire reported by O’Reilly is equally suspicious. One of our camera crews reported that they believed the Argentine police or army had fired a few rubber bullets at the crowd. That was the only report we received of weapons being fired that night. The crowd had been confined to a relatively small area around the president’s palace. It wasn’t like there were protests going on all over the city. I did see soldiers armed with rifles on guard around the presidential palace. But they did not take aim at the crowd and I heard no gunfire. No one I talked to as the crowd was breaking up told me they heard gunfire. O’Reilly’s claim that the army fired weapons into the crowd is not supported by anyone’s recollection. Had that happened, I believe, the riot would have escalated into an uncontrollable attack on government buildings all over the capital. Nothing like that happened. Actually, the military chiefs, yielding to the public outcry over the war’s outcome, were willing to give up their offices, which they did the next day.

… I am fairly certain that most professional journalists would refer to the story I have just related as “routine reporting on a demonstration that got a little nasty.” O’Reilly, in defending himself yesterday against Corn’s “Mother Jones” piece, said “We were in a combat situation in Buenos Aires.” He is misrepresenting the situation he covered, and he is obviously doing so to burnish his credentials as a “war correspondent,” which is not the work he was performing during the Falklands war. I don’t think it’s as big a lie as Brian Williams told because O’Reilly hasn’t falsely claimed to be the target of an enemy attack, but he has displayed a willingness to twist the truth in a way that seeks to invent a battlefield that did not exist. And he ought to be subject to the same scrutiny Williams faced.

I have no idea where this story will go next, but I do want to hear more from Engberg.

His opening description of O’Reilly as “Fox News bloviator” might suggest to some that he is no fan of O’Reilly, but his career at CBS News is a good one that includes winning a top investigative reporting award.

Though it is 33 years after the fact, this testimony certainly provides a new challenge for “O’Reilly – and demands some answers from the Fox show host.

Web articles – via partners/network co-ordinators. This website and its contents are the exclusive property of ANGA Media Corporation . We appreciate your feedback and respond to every request. Please fill in the form or send us email to: [email protected]
Previous: Kardashian Car Crash : Kim, Khloe, Kylie and North West in Road Accident
Next: Dutch man survives fall off 4000ft ‘World’s End’ cliff (Video)