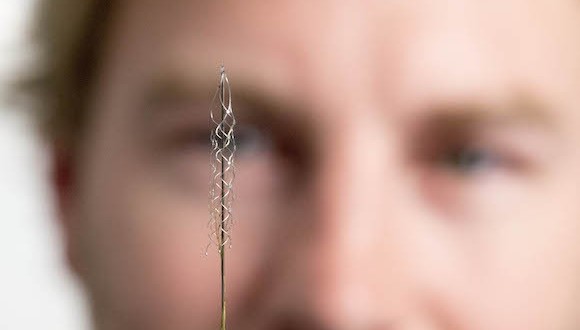 “Bionic spinal cord” could give extra function and mobility to users of mobility assist devices.

The brain machine interface consists of a stent-based electrode (stentrode), which is implanted within a blood vessel next to the brain, and records the type of neural activity that has been shown in pre-clinical trials to move limbs through an exoskeleton or to control bionic limbs.

The new device is the size of a small paperclip and will be implanted in the first in-human trial at The Royal Melbourne Hospital in 2017.

The results published today in Nature Biotechnology show the device is capable of recording high-quality signals emitted from the brain’s motor cortex, without the need for open brain surgery.

Principal author and Neurologist at The Royal Melbourne Hospital and Research Fellow at The Florey Institute of Neurosciences and the University of Melbourne, Dr Thomas Oxley, said the stentrode was revolutionary.

“The development of the stentrode has brought together leaders in medical research from The Royal Melbourne Hospital, The University of Melbourne and the Florey Institute of Neuroscience and Mental Health. In total 39 academic scientists from 16 departments were involved in its development,” Dr Oxley said.

“We have been able to create the world’s only minimally invasive device that is implanted into a blood vessel in the brain via a simple day procedure, avoiding the need for high risk open brain surgery.

“Our vision, through this device, is to return function and mobility to patients with complete paralysis by recording brain activity and converting the acquired signals into electrical commands, which in turn would lead to movement of the limbs through a mobility assist device like an exoskeleton. In essence this a bionic spinal cord.”

Co-principal investigator and biomedical engineer at the University of Melbourne, Dr Nicholas Opie, said the concept was similar to an implantable cardiac pacemaker – electrical interaction with tissue using sensors inserted into a vein, but inside the brain.

“Utilising stent technology, our electrode array self-expands to stick to the inside wall of a vein, enabling us to record local brain activity. By extracting the recorded neural signals, we can use these as commands to control wheelchairs, exoskeletons, prosthetic limbs or computers,” Dr Opie said.

“In our first-in-human trial, that we anticipate will begin within two years, we are hoping to achieve direct brain control of an exoskeleton for three people with paralysis.”

“Currently, exoskeletons are controlled by manual manipulation of a joystick to switch between the various elements of walking – stand, start, stop, turn. The stentrode will be the first device that enables direct thought control of these devices”

Neurophysiologist at The Florey, Professor Clive May, said the data from the pre-clinical study highlighted that the implantation of the device was safe for long-term use.

“Through our pre-clinical study we were able to successfully record brain activity over many months. The quality of recording improved as the device was incorporated into tissue,” Professor May said.

“Our study also showed that it was safe and effective to implant the device via angiography, which is minimally invasive compared with the high risks associated with open brain surgery.

“The brain-computer interface is a revolutionary device that holds the potential to overcome paralysis, by returning mobility and independence to patients affected by various conditions.”

Professor Terry O’Brien, Head of Medicine at Departments of Medicine and Neurology, The Royal Melbourne Hospital and University of Melbourne said the development of the stentrode has been the “holy grail” for research in bionics.

“To be able to create a device that can record brainwave activity over long periods of time, without damaging the brain is an amazing development in modern medicine,” Professor O’Brien said.

“It can also be potentially used in people with a range of diseases aside from spinal cord injury, including epilepsy, Parkinsons and other neurological disorders.”

Web articles – via partners/network co-ordinators. This website and its contents are the exclusive property of ANGA Media Corporation . We appreciate your feedback and respond to every request. Please fill in the form or send us email to: [email protected]
Previous: 6-year-old Happy Meal disturbingly looks almost fresh “Photo”
Next: Zika virus: Indiana officials confirm first human case “Report”