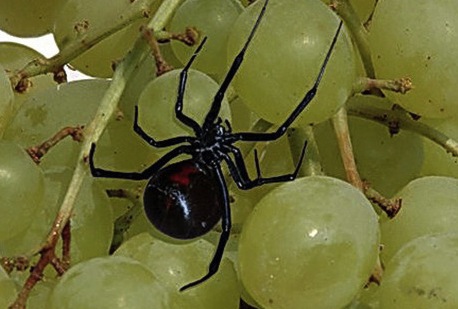 Giant is investigating its supply chain after a customer said she found a black widow spider in a bag of grapes.

A customer alerted the grocer on Thursday that she found the insect among the fruit purchased at the Dillsburg store, company spokesman Chris Brand said in a statement.

“I saw the spider come up,” she said. “I quickly dropped the colander and screamed. My first thought was to use a hose and force it down the drain into the garbage disposal.”

But, Whalen said she ignored her first inclination to kill the insect that had survived for nearly a week in her refrigerator among grapes bought at Giant Food Stores in Dillsburg.

Maybe it was the spider’s large belly or long legs that gave Whalen pause. Regardless of the reason, she said the insect appeared unusual enough to capture.

A few hours later, she found a second black widow spider laying dead among the grapes.

After a quick Internet search, Whalen said she found that the spider’s marking matched those of a juvenile black widow spider.

“They are dangerous,” he said. “They are venomous.”

“I gave them a call to let them know that I found the spider, I wasn’t expecting anything in return,” Whalen said. “I just wanted to make consumers aware of this. I’m a loyal Giant shopper.”

In a statement, Chris Brand, a Giant spokesman, said in an email that the company regrets the incident and is taking immediate steps to prevent a similar incident from happening in the future.

“A customer alerted us yesterday that she found a black widow spider in grapes she had purchased from our Dillsburg store,” he said. “We will continue to diligently inspect product both at our perishable distribution center and at the store while thoroughly investigating this serious matter with our suppliers.”

A Giant representative apologized to Whalen and is sending her a letter and a gift card, she said.

“Had I known this could happen, I would have paid much more attention,” Whalen said. “I will look at the grapes a little closer instead of just grabbing a pack.”

Web articles – via partners/network co-ordinators. This website and its contents are the exclusive property of ANGA Media Corporation . We appreciate your feedback and respond to every request. Please fill in the form or send us email to: [email protected]
Previous: Best new tablets for 2013 holiday season
Next: Senate scandal : PMO says Nigel Wright memo misled Harper