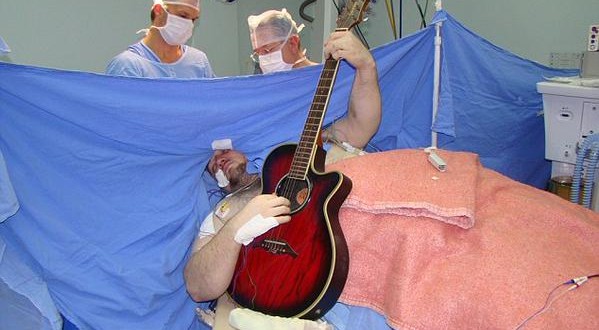 Anthony Kulkamp Dias, 33, was undergoing surgery to remove a brain tumor, but that didn’t stop him from jamming on his guitar.

According to the New York Daily News, Anthony Kullkamp Dias had to be conscious during the operation in order for doctors to monitor his cognitive skills while they sifted through his brain. Dias, who’s a banker and has played the guitar professionally for over 20 years, sang six songs during his surgery, including the Beatles’ “Yesterday,” one called “Emanual” that was written for his infant son, and a few Brazilian tunes.

“My right hand was a bit weaker, because that was the side they were operating on,” he told The Telegraph. “So I stopped and rested. I was interspersing songs and talking with them.”

Dias said he had been stammering and forgetting things before he was diagnosed with the tumor a few months ago, just 15 days after the birth of his son. Luckily, doctors were able to remove at least 90 percent of the tumor, according to CNN.

Web articles – via partners/network co-ordinators. This website and its contents are the exclusive property of ANGA Media Corporation . We appreciate your feedback and respond to every request. Please fill in the form or send us email to: [email protected]
Previous: Robot Goes Fruit Ninja with a Katana Sword (Video)
Next: Bieber found guilty of assault in Canada (Video)