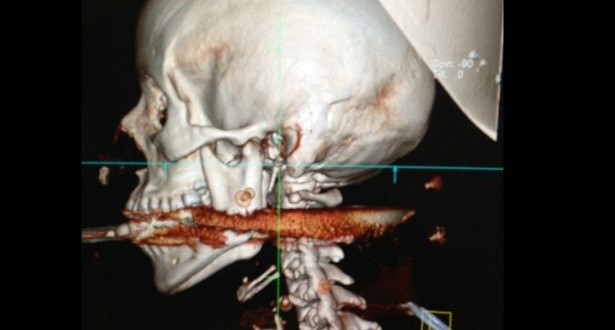 brazilian woman + 1 centimeter away from death

A Brazilian woman cheated death by just one centimetre after her husband accidentally shot her in the mouth with a HARPOON.

Elisangela Borborema Rosa’s husband was cleaning his spear gun when it went off, firing a harpoon into her face, the Rio de Janeiro State Health Department said.

The spear hit her cervical spine and came within one centimetre of killing her, according to neurosurgeon Allan da Costa.

Mrs Rosa, 28, was rushed to hospital and underwent emergency surgery after the incident in the coastal city of Arraial do Cabo.

Despite her ordeal, she is expected to make a full recovery.

“This is the first case of its kind that we have gotten at the hospital,” said Allan da Costa, a neurosurgeon who operated on the woman.

“The peculiarity of the accident is that the tip of harpoon penetrated the region between her top vertebrae and the spinal cord. If the object hit only 1 cm to one side the patient would have become a quadriplegic. If it had hit 1 cm to the other side or reach one artery to the brain, she would have been dead. ”

Doctors are keeping her under observation.

“She is moving both sides(of her body), but having a little difficulty on the right side,” da Costa. said. “We need to wait for the sedation to wear off and the tracheotomy tube to be removed to make a full assessment. If all goes well, she will be discharged in a week.”
This is not the first harpoon accident in the state this year.

Last month, Bruno Barcellos de Souza Coutinho, 34, was cleaning his harpoon when it misfired and pierced the corner of his left eye and his skull.

He was brought to a local hospital conscious and alert and after a four-hour surgery, doctors removed the object without any brain damage.

In Coutinho’s case, a neurosurgeon said the harpoon was millimeters away from vital arteries.

The case was considered a rarity and the procedure to remove it was unheard of in the city of Petropolis, just outside of Rio de Janeiro.

Web articles – via partners/network co-ordinators. This website and its contents are the exclusive property of ANGA Media Corporation . We appreciate your feedback and respond to every request. Please fill in the form or send us email to: [email protected]
Previous: Liu Lingchao says portable home makes him feel free
Next: NFL Week 11 picks : Percy Harvin Returning and The Fate of Arian Foster