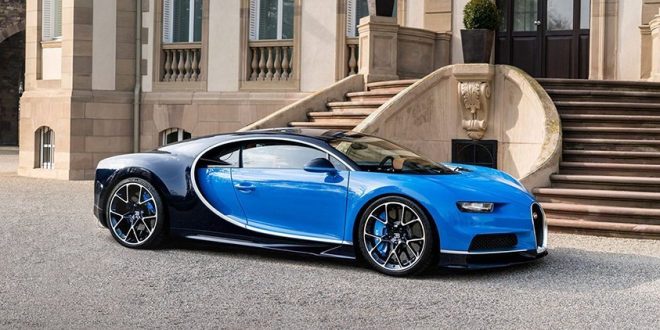 Bugatti is reading its Veyron replacing Chiron for first deliveries soon, as it reveals each car takes six months to build.

Bugatti will produce only 500 examples of the all-new Chiron “super sports car,” as the company calls it, and sell them for $2.6 million each. Even at that price, Bugatti has already taken about 180 preorders.

The Chiron looks like an evolution of the Veyron, refining its styling and emphasizing Bugatti design language. Like its predecessor, it has only two seats and uses a carbon fiber body. The mid-engine sits behind the cabin. Designer Achim Anscheidt said during the presentation that the Chiron’s “form follows performance.” As an example, the broad curve along the side serves as an air intake.

The cabin befits a $2.6 million car, and Anscheidt pointed out that the design team had a “no-plastic philosophy.” However, the Chiron is mostly about straight-line performance. It uses a new version of its predecessor’s 8-liter W-16 engine, this one using a two-stage turbocharging system. There are four turbos in all, but two are designed to be always on, while the other two are electrically actuated, spun up when the driver wants more acceleration.

All told, that power plant makes 1,500 horsepower and 1,180 pound-feet of torque. Although it’s certainly more powerful than the Veyron, Bugatti only mentioned a comparable acceleration time of 2.5 seconds to 62 mph. Top speed was noted as a governed 260 mph (420 kph), but Bugatti is aiming for more, and will include a “top speed mode” activated by a special key.

LED headlights up the front make up what the company calls an “eight-eye face,” while an active wing on the rear serves as an air brake. 20-inch wheels on front and 21-inch wheels at the rear make up a staggered set, with eight titanium brake pistons up front and six on the rears.

The Chiron is really more work of art than automobile, and as with rare works of art, you probably won’t see one out in public.

Web articles – via partners/network co-ordinators. This website and its contents are the exclusive property of ANGA Media Corporation . We appreciate your feedback and respond to every request. Please fill in the form or send us email to: [email protected]
Previous: Nathan O’Brien: Statement from Chief Constable Chaffin for Liknes and O’Brien family
Next: Howe Sound showing recovery, Vancouver Aquarium report finds