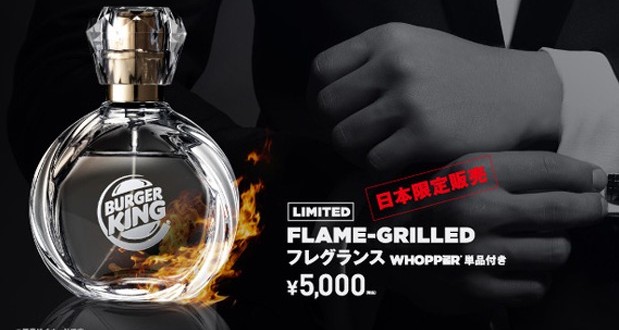 Burger King Japan has announced it will be offering a limited edition burger-scented perfume. But is this marketing genius or one Whopper of an April Fool’s Day prank?

Burger King is betting that you’re sick of the scents of flowers, musk or morning dew and would much rather smell like its flame-grilled burgers instead.

Can you imagine greeting someone for a dinner date and leaning in for that cheek kiss only to be overwhelmed by a giant whiff of grilled meat, onions and weirdly sweet bun? It’s enough to put you off that quinoa salad you were going to order.

It’s available for one day only on April 1, which is why that whole hoax thing is something that springs back up. Which is not to say that the fast food company won’t actually manufacture and distribute the beefy scent. After all, they have done a variation of it before.

In 2008, Burger King US released ‘Flame’ by BK, a body spray it described as the “essence of love”.

It won’t come cheap either with a price tag of $53 (5000 Japanese yen) but you’ll get a whopper with it. So maybe you can layer that scent for a whole-bodied flame-grilled experience.

The perfume will be released on the same day as the inaugural Whopper Day.

Web articles – via partners/network co-ordinators. This website and its contents are the exclusive property of ANGA Media Corporation . We appreciate your feedback and respond to every request. Please fill in the form or send us email to: [email protected]t
Previous: TTC driver charged in death of Amaria Diljohn
Next: Kat Von D Won’t Apologize : Model Is Not Sorry About Naming Her Lipstick ‘Underage Red,’ And She’s Not Pulling It From Her Makeup Line!