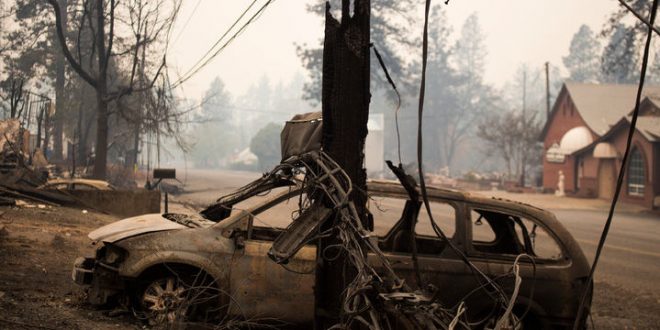 California fires utility customers May Be on Hook for Billions in Wildfire Damage.

As wildfires ravage large swaths of California for a second year, one of the state’s biggest utilities has declared that it faces billions of dollars in potential liability — far more than its insurance would cover.

The potential losses could leave the company’s customers on the hook to pay the bill, exposing businesses and consumers to higher costs. The utility, Pacific Gas and Electric Company, could even face bankruptcy, putting pressure on the state for a bailout.

With its financial liabilities mounting, the company’s shares dropped by more than 20 percent on Wednesday. More than half of its market value has been wiped out since late last week as the fires have spread.

Investigators have yet to determine the cause of the deadliest of the current blazes, known as the Camp Fire, which has killed at least 56 people and destroyed virtually the entire town of Paradise, about 90 miles north of Sacramento. PG&E disclosed in a regulatory filing on Tuesday that an outage and damage to a transmission tower were reported in the area shortly before the fire started last week.

Many fires in recent years have been caused by downed power lines serving California’s utilities. State officials have determined that electrical equipment owned by PG&E, including power lines and poles, was responsible for at least 17 of 21 major fires in Northern California last fall. In eight of those cases, they referred the findings to prosecutors over possible violations of state law.

Citigroup estimates that PG&E’s exposure to liability for those fires is $15 billion — and that it could face another $15 billion in claims if it is found responsible for the Camp Fire, a number that could rise because the fire is only a third contained.

“The damages, if you add 2017 and 2018, obviously are going to be really significant,” said Praful Mehta, a Citigroup analyst.

Web articles – via partners/network co-ordinators. This website and its contents are the exclusive property of ANGA Media Corporation . We appreciate your feedback and respond to every request. Please fill in the form or send us email to: [email protected]
Previous: Belgian mechanic destroys F-16: accidentally fired on the ground
Next: Donald Trump believing in Santa: Because at seven, that’s marginal, right?’