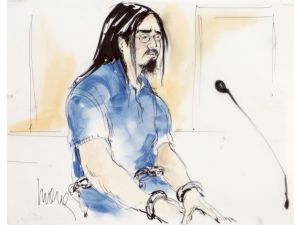 A Garden Grove man pleaded guilty Friday to a federal terrorism charge, admitting he intended to aid al-Qaida fighters by traveling to Pakistan, where he would provide weapons training.

Sinh Vinh Ngo Nguyen, 24, who has also used the name Hasan Abu Omar Ghannoum, entered the plea in U.S. District Court in Los Angeles to one count of attempting to provide material support to a designated foreign terrorist organization.

Nguyen, who appeared in U.S. District Court in Los Angeles, was scheduled to be sentenced on March 21. He faces up to 15 years in federal prison.

He had been taken into custody Oct. 11 at a bus station in Santa Ana, where authorities said he planning to board a bus headed to Mexico.

He planned to fly from Mexico to Peshawar, Pakistan, where we intended to train 30 al-Qaida fighters for several weeks to prepare them “for a guerilla warfare ambush attack on coalition forces” that would take place in December, according to a news release from the U.S. Attorney’s Office for the Central District of California.

Nguyen, who also used the name Hasan Abu Omar Ghannoum, had a false U.S. passport and a hard drive that held more than 180 firearm training videos when he was taken into custody, according to authorities.

In a plea agreement filed Dec. 20, Nguyen admitted that about a year ago he had traveled to Syria for four months to join opposition forces, the news release stated.

On a social networking site while in Syria, he said he was fighting against the embattled regime of Bashir al-Assad and “that he had had a ‘confirmed kill,” according to the release. Back in the U.S., Nguyen told others he had offered to train al-Qaida forces in Syria but was rejected.

From Aug. 3 to Oct. 11, he met repeatedly with a man posing as an al-Qaida recruiter who was actually working with the FBI, the news release stated. Together, they planned Nguyen’s trip from California to Pakistan.

Nguyen had told the man posing as the al-Qaida recruiter that “he wanted to return to jihad because ‘this was what he was born to do,’” the news release stated.

Web articles – via partners/network co-ordinators. This website and its contents are the exclusive property of ANGA Media Corporation . We appreciate your feedback and respond to every request. Please fill in the form or send us email to: [email protected]
Previous: Plus-size Barbie dolls Sparks Debate Over Body Image
Next: 10 healthiest housing markets in America : Zillow says