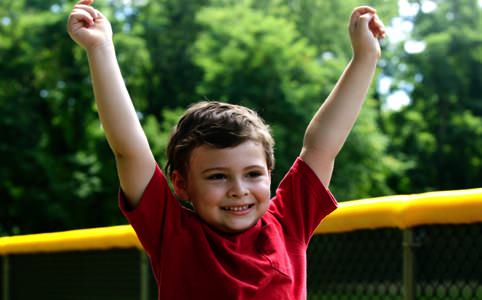 While many Canadian kids play sports and have access to parks and playgrounds, a new report has given them aD minus when it comes to physical activity targets.

For the first time, Active Healthy Kids Canada used its annual Report Card on Physical Activity for Children and Youth to see how Canadians measured up to kids in 14 other countries.

Canada trailed near the back of the international pack for overall physical levels along with Australia, Ireland and the U.S., while Scotland received an F. Despite the presence of established policies, places and programs designed to help kids get moving, the report pointed to a “culture of convenience” to account for why many Canadian kids aren’t more active.

“I think we’ve trained ourselves to think of the outdoors as this dangerous place” says Doctor Mark Tremblay, Chief Scientific Officer of Active Healthy Kids Canada. “Dangerous because of traffic or strangers, or weather or the sun, or whatever the case may be, and that’s a very rapid change that has occurred across the last generation.”

Tremblay adds that a mix of activities are needed to help get kids moving and says children are missing out on chances for spontaneous movement like travelling on foot to and from school.

“I think the key thing is that we need to give our kids room to move, both literally and figuratively” says Tremblay. “We need to back off a little bit, and allow them to explore, to make mistakes and to learn, and do that in a creative fashion, in the outdoors with the world’s biggest playground.”

Active Healthy Kids Canada’s annual Report Card on Physical Activity for Children and Youth found 62 per cent of parents said their five- to 17-year-olds were always driven to and from school. The report also found that Canadian parents say there are available parks, facilities and programs for physical activity, but they aren’t making sure their kids use them.

Web articles – via partners/network co-ordinators. This website and its contents are the exclusive property of ANGA Media Corporation . We appreciate your feedback and respond to every request. Please fill in the form or send us email to: ne[email protected]
Previous: Two women in moose attack (Video)
Next: Eva Longoria : Actress slit wide open Cannes dress