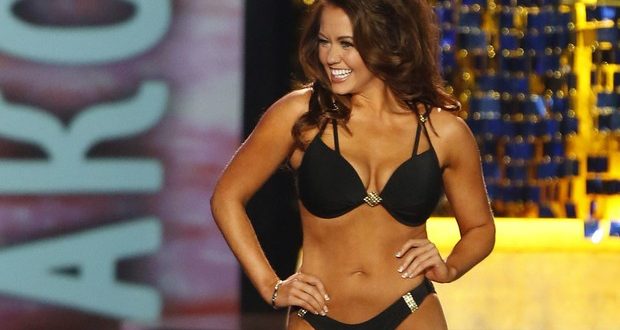 For the first time in the competition’s history, Miss North Dakota was crowned Miss America 2018.

Cara Mund has won the Miss America 2018 crown. There was not a dry eye in Boardwalk Hall in Atlantic City, New Jersey, on Sunday, 10 September, when event host Chris Harrison and Sage Steele announced the winner of the highly anticipated beauty pageant.

The 23-year-old Brown University graduate managed to emerge victorious in five categories including lifestyle and fitness, evening wear, talent, interview and onstage questions. She beat 50 contestants to win the crown.

Along with the crown, the new Miss America won a $50,000(£37000) scholarship, a six-figure salary for the next one year and a contract with Dick Clark Productions.

During the competition, she revealed her mother as her greatest role model. “She’s been diagnosed with cancer three times. Despite the circumstances, she’s always told me, you can’t control the cards you’re dealt, but you can control the hand,” Mund said during the event.

The multi-talented beauty queen has previously won pageants like Outstanding Teen, Little Miss, Miss Pre-Teen and Miss Junior Teen. Apart from winning beauty contests, Cara is a national dance champion. She won over the audience and the judges during the Miss America event by her self-choreographed jazz dance moves on Michael Jackson’s The Way You Make Me Feel.

During the competition, Cara was asked a tricky question about US president Donald Trump withdrawing the United States from the Paris climate deal. “I do believe it’s a bad decision. Once we reject that, we take ourselves out of the negotiation table and that’s something that we really need to keep in mind. There is evidence that climate change is existing. So whether you believe it or not, we need to be at that table, and I just think it’s a bad decision on behalf of the United States,” she answered.

There she is! @MissAmericaND takes her first walk as #MissAmerica 2018! 🇺🇸 pic.twitter.com/2xkSvMuqxu

Web articles – via partners/network co-ordinators. This website and its contents are the exclusive property of ANGA Media Corporation . We appreciate your feedback and respond to every request. Please fill in the form or send us email to: [email protected]
Previous: Researchers observe largest solar flare in 12 years (Watch)
Next: Kenneka Jenkins: Chicago woman found dead in freezer of Rosemont hotel