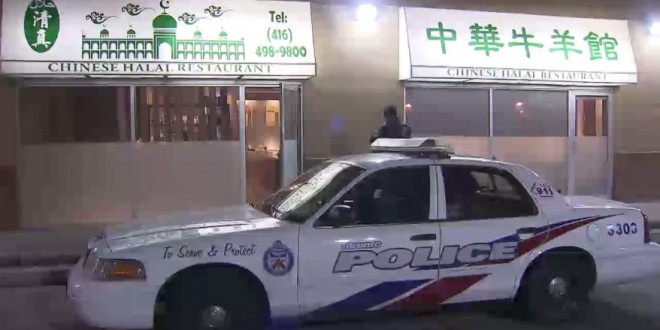 Eight people were taken to hospital, including one child, after a carbon monoxide leak at a North York restaurant late Sunday night.

Around 10:30 on Sunday night, Paramedics and Toronto fire services were called to a restaurant at 101 Ravel Road near Finch and Leslie.

The initial call was for the suspicion of a carbon monoxide leak. Upon crews arrival, Enbridge had already shut off the gas, and Paramedics went to work on victims.

Although there were no serious injuries, several were treated on scene before being taken to Scarborough Grace Hospital.

Although unconfirmed by authorities, Toronto Fire services say a faulty water heater could have been the source of the leak.

“Initial readings came in at 500 parts per million, which are dangerous levels.” said Captain David Eckermnan of Toronto Fire Services
“Carbon Monoxide is not like natural gas or propane, so it’s likely the effects would be localized and less of a danger to neighboring businesses.”

Toronto Public Health has also been called in to examine the restaurant’s practices and procedures.

Web articles – via partners/network co-ordinators. This website and its contents are the exclusive property of ANGA Media Corporation . We appreciate your feedback and respond to every request. Please fill in the form or send us email to: [email protected]
Previous: US Astronauts fix stalled rail car during spacewalk
Next: Ontario to fund fertility treatments at five local clinics