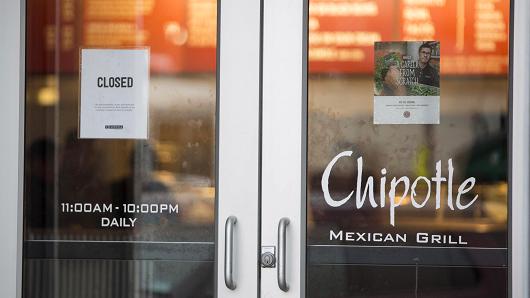 Chipotle is closing all of its stores for a few hours on Feb. 8 as all staff members take part in a meeting to discuss new food safety measures and company policies following the six food poisoning outbreaks tied to the company last year.

The company has been working to win back customers after health officials investigated six outbreaks last year involving E. coli, salmonella and norovirus that were linked to Chipotle. Sales quickly dropped 30 percent in December.

Chipotle CEO Steve Ells said during an investor conference Wednesday that the company has sat down with the Center for Disease Control to discuss the illness, which, so far, has infected about 53 people in nine states and lead to the closure of 43 stores in November.

Federal officials haven’t confirmed if the E.coli outbreak is over. In the meantime, Arnold says the company has hired a food safety expert, now tests produce before distributing it to restaurants and will begin a campaign in February to help regain trust.

Web articles – via partners/network co-ordinators. This website and its contents are the exclusive property of ANGA Media Corporation . We appreciate your feedback and respond to every request. Please fill in the form or send us email to: [email protected]
Previous: Honduran archaeologists unearth ceramics at ‘White City’ mystery, Report site
Next: Nissan Rogue Warrior gets snow tracks, and it’s awesome (Video)