Home » World » Clooney Loses Job To Robot Nestle : American actor is replaced by a charming ROBOT as brand ambassador for Nestle in Japan 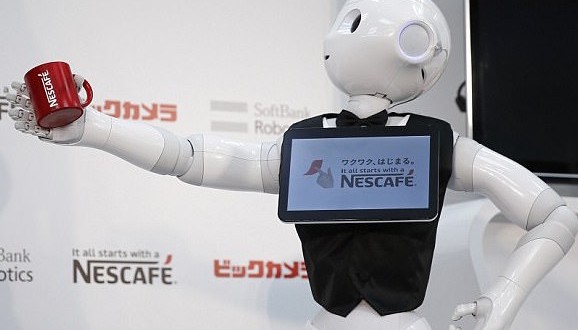 Clooney Loses Job To Robot Nestle : American actor is replaced by a charming ROBOT as brand ambassador for Nestle in Japan

Clooney Loses Job To Robot Nestle : American actor is replaced by a charming ROBOT as brand ambassador for Nestle in Japan

“By simply answering my questions, I can tell which coffee machine is perfect for you,” Pepper declared with confidence during the opening rituals at Bic Camera’s Yurakucho store in Tokyo.

In its new role, Pepper will greet customers at electronics shops and show off its sales skills. It can explain the difference between the Nestle Dolce Gusto and Nestle Gold Blend Barista coffee machines and help buyers choose the one suitable for their needs.

A chatty robot with a cute and witty sense of humor, Pepper is also capable of more personal kinds of interaction, such as playing games or quizzing customers. Unfortunately for some, these interactions can only take place in Japanese at the moment.

“The collaboration with SoftBank and Pepper is a very important project for us because we consider it an opportunity to provide a new type of innovation,” said Kensuke Otani, manager of Nestle’s Coffee System Business Department. “We want to actualize a futuristic experience at stores by utilizing Pepper, a technology of the future.”

Pepper actually began work at four electronics stores in the capital simultaneously on Monday. According to Nestle, 1,000 Pepper robots will ultimately be hired to assist customers nationwide.

This is not Pepper’s first job — it collectively embarked on its working career at creator SoftBank Corp.’s 74 stores.

“We originally introduced Pepper at SoftBank shops so that it can serve customers in ways that we weren’t able to before, providing a new type of service,” said Kenichi Yoshida, vice president of the Business Development Division at SoftBank Robotics Corp.

Pepper was unveiled in June as the first humanoid robot able to communicate and read people’s emotions. It is set to go on sale in February next year.

Web articles – via partners/network co-ordinators. This website and its contents are the exclusive property of ANGA Media Corporation . We appreciate your feedback and respond to every request. Please fill in the form or send us email to: [email protected]
Previous: Stephen Solis-Reyes : London hacking suspect faces more RCMP charges
Next: Mediterranean diet linked to slower aging, new study says