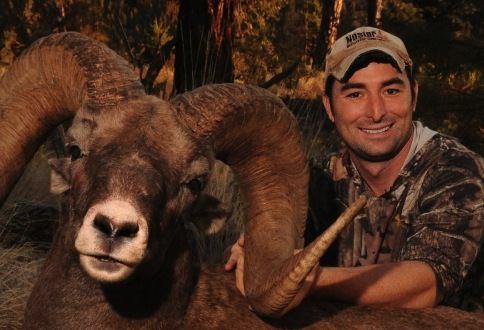 A hunter who paid $350,000 for the right to hunt and kill an endangered African black rhino says he has had to hire full-time security after receiving death threats.

Corey Knowlton became a figure of hate after his name was leaked on to the internet after his winning bid at last week’s Dallas Safari Club auction.

Speaking on state television, Mr Knowlton, a hunting consultant, said that his name had been posted on Facebook and picked up by websites that publicised his involvement.

“They’re wanting to kill me. They’re wanting to kill my children. They’re wanting to skin us alive… they’re wanting to burn my house down,” he said of the type of threats received.
FBI spokeswoman, Katherine Chaumont said Wednesday in a statement, “The FBI is aware of the threats. If a violation of federal law is determined, additional action or investigation as necessary will take place.”
Corey Knowlton told Dallas television stations WFAA and KTVT that he won last week’s Dallas Safari Club auction to hunt a black rhino in the African nation of Namibia.
Knowlton said he simply put up $350,000 for rhino conservation and anti-poaching causes. He wants people to know that if he hadn’t made the bid there would be less money going toward a good cause.

The Namibian government says that Corey Knowlton’s $350,000 will go into the Conservation Trust Fund For The Namibian Black Rhino.

An estimated 4,000 black rhinos remain in the wild, and the auction drew critics who said all members of an endangered species deserve protection.

Web articles – via partners/network co-ordinators. This website and its contents are the exclusive property of ANGA Media Corporation . We appreciate your feedback and respond to every request. Please fill in the form or send us email to: [email protected]
Previous: Britons entrants sought for Naked Sledding World (VIDEO)
Next: “Gilligan’s Island” : Tina Louise, Dawn Wells Speak About Russell Johnson’s Death