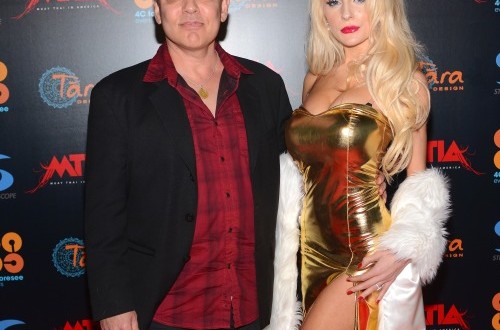 Courtney Stodden is one of those gross tumors inside of pop culture, that is only there for reassurance that the world surely will be ending and if it is not, then it should. Kind of like Octomom or John and Kate Plus 8. The 19-year-old is most famous for marrying actor Doug Hutchinson when he was 51 and when she was 16. She has gone on to make appearance on different reality TV shows, including VH1’s Couples Therapy. Well, I guess the therapy didn’t work because the couple who has been together for two years has gone on to sign a separation agreement.

During the interview, the teenager was covered in body glitter and wore bright pink lipstick and a red velvet dress. She said of her estranged husband: “He was so in love with me and he was, like, ‘You’re beautiful the way you are,’ kind of like the au naturel, organic thing.”

Stodden added: “He was like, ‘You’re beautifully organically, why would you change something that’s perfect?’”

But Hutchison’s objection to his teen bride’s plastic surgery only made her more defiant. “That made me want to do it more!” she said. “So, he just loved me so much the way that I was. But you know, I’m happier now.”

The duo appeared on VH1’s “Couple’s Therapy” in 2012, where many of the other cast members were perplexed over their relationship. Co-star Nik Richie even told the Huffington Post at the time Stodden had made sexual advances when Hutchison was there.

“Courtney made sexual advances at me every time we were alone in the house. She didn’t care — she even did it in front of Doug and he was cool with it. It got so bad I had to have a meeting with producers to tell her to stop because I didn’t want to go to jail,” he said.

But Richie didn’t stop there. He accused Stodden of being high on prescription pills and called their marriage a sham. “I think their entire relationship in contrived. This is a desperate attempt by Courtney’s mom to use Doug to fulfill a dream and/or sexual fantasy she could never have,” Richie added. “Courtney doesn’t love Doug — she is too young and too high on meds to even know what love is. I get the feeling she is hiding a lot of dark secrets. What child marries a creepy old man who courted her online and in email? That is ‘Dateline’ style.”

Web articles – via partners/network co-ordinators. This website and its contents are the exclusive property of ANGA Media Corporation . We appreciate your feedback and respond to every request. Please fill in the form or send us email to: [email protected]
Previous: Hollywood Reacts to Paul Walker’s Death (VIDEO)
Next: Caroline Berg Eriksen : ‘Wildly provocative’ post birth selfie causing grief for new mother