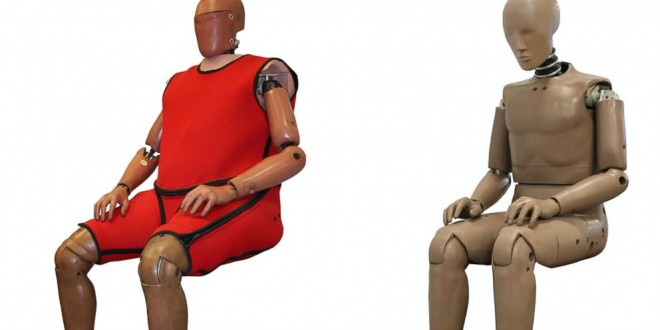 Crash-test dummies are expected to change to reflect the ever-changing bodies of Americans, according to a report from ABC News.

Manufacturer Humanetics has decided to make the dummies a lot heavier as studies have shown that obese people are significantly more likely to die in car accidents than their thinner contemporaries.

The new machines are modelled on a person weighing over 19 stone, whereas previously it was just under 12 stone.

A 2010 study at the University of Buffalo analysed 150,000 car crashed in the US and found that morbidly obese drivers were 56% more likely to die.

Humanetics chief executive Chris O’Connor, said the reason was the way people put on weight around their midriff.

He told CNN: “The reason is the way we get fat. We get fat in our middle range. And we get out of position in a typical seat.”

The dummies are expensive and extremely sophisticated. According to O’Connor, they can now collect data from over 130 different channels of information.

The company is also working on making age-specific dummies, as research reveals that older drivers are also more at risk during crashes.

Web articles – via partners/network co-ordinators. This website and its contents are the exclusive property of ANGA Media Corporation . We appreciate your feedback and respond to every request. Please fill in the form or send us email to: [email protected]
Previous: It’s Official: Google Glass banned from US cinemas
Next: Xiaomi is now ranked third phone manufacturer : IDC