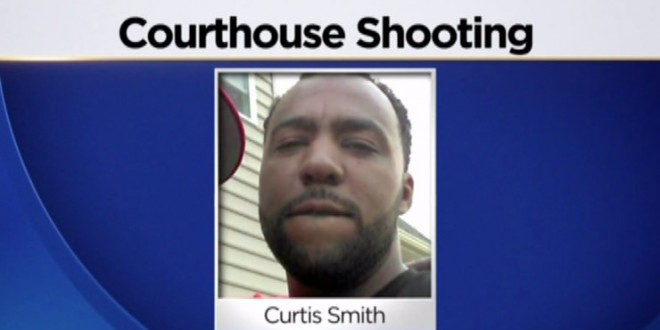 Curtis Smith, 34, of Coatesville, was killed by another deputy after the attack about 11 a.m. in the lobby of the Chester County Justice Center in West Chester, Pa., District Attorney Thomas Hogan said at a news conference.

“[He] came directly into the justice center and pulled out a knife and attacked a deputy sheriff, slashing him,” District Attorney Tom Hogan said on Tuesday afternoon.

Another deputy responded by opening fire on Smith, striking him, Hogan said. Smith was taken to Paoli Hospital, where doctors pronounced him dead. The injured sheriff’s deputy, whose identity was not released, was treated for wounds to his arm and hand and is listed in stable condition. No one else was harmed.

Hogan revealed Smith’s connection to the March 1 White House incident, in which Smith allegedly climbed over a stone wall at the South East vehicle entrance, according to court documents. Although Smith was arrested by the Secret Service and charged with unlawful entry, he had reached a settlement in late April allowing him to defer prosecution until a status hearing scheduled for October.

Smith had been a truck driver for propane company AmeriGas for about two months, according to a company spokesperson.

Web articles – via partners/network co-ordinators. This website and its contents are the exclusive property of ANGA Media Corporation . We appreciate your feedback and respond to every request. Please fill in the form or send us email to: [email protected]
Previous: New Fossil of extinct reptile could solve the mystery of lizard evolution
Next: James Red Duke : iconic surgeon who attended JFK, dead at 86