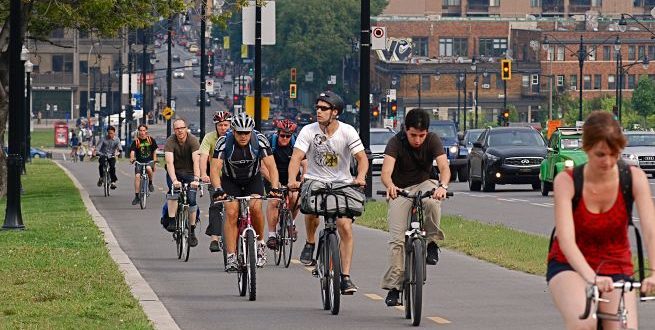 Cycling is even more popular in Quebec, says new study

Cycling is even more popular in Quebec, says new study

Cycling continues to grow in popularity, with slightly more people relying on two wheels as their main mode of transportation than they did five years ago, according to a report published Tuesday by the lobby group Vélo Québec.

The report found that more people, especially in urban centres, are opting for cycling as a mode of transportation. About 1.9 million people bike to and from work and school.

In Montreal, rides as transportation rose by 57 per cent in the short span of five years. There are about 116,000 trips made on a daily basis across the city.

Vélo Québec credits the spike to an expanded network of cycling paths and the city adopting bike-friendly policies.

The report shows that biking is equally popular across the sexes. In Quebec, about 45 per cent of 3.2 million adult cyclists are women.

The biking trend is also continuing to grow — an additional 600,000 Quebecers have taken up biking in the last 20 years.

There has also been a spark in cycling among children and teens. Seven out of ten cyclists between the ages of six and 17 hop on their bikes every week.

More cyclists are also choosing to brave winter weather and bike year-round, at least in part because cities and towns are adopting more bike-friendly policies.

The data is a result of Velo Quebec’s fifth study, but the first time it has looked at cycling’s economic impact: the study says cycling is worth more than $1 billion in sales and tourism.

Velo Quebec uses studies such as this one to try to inform politicians. Recently, the Quebec government introduced changes to the Highway Safety Code, including obliging drivers to stay at least one metre away from cyclists and increasing fines for dooring.

Web articles – via partners/network co-ordinators. This website and its contents are the exclusive property of ANGA Media Corporation . We appreciate your feedback and respond to every request. Please fill in the form or send us email to: [email protected]
Previous: Lava spattering at Kilauea volcano (Video)
Next: Robert Bates: Oklahoma ‘Taser error’ ex-officer jailed for four years