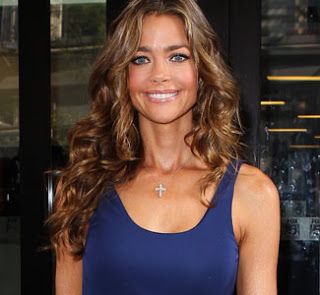 Denise, 38, now believes she made a mistake and would dissuade any young girls from having surgery.

The American actress underwent her first breast enlargement operation when she was 19, and later had another procedure which boosted her chest but the results were “not good”. Her third operation was a breast reduction.

Speaking to US radio DJ Howard Stern she said: “I was 19, and my roommate had the best boobs ever, and she had just had hers done. I was flat as a board, and I thought, ‘Whoa, you can just buy them,’ and stupidly had them done. The next guy put bigger ones in, and it was not good – they were a D cup!”

She said: ‘[My first augmentation] when I was 19, a doctor put in bigger implants than what I’d asked for. I was in such a hurry to get them that I didn’t research my doctor.’

You’d have though the bad experience would have taught Richards a lesson, but she then went and got a second dose of surgery that she wasn’t happy with, increasing her bust to a size D, ahead of filming her 1998 movie Wild Things.

Denise says she is finally happy with her breasts, following a third stab at going under the knife.

‘This is the size I wanted them to look at 19. There is a long investment with breast implants.
They are not going to last a lifetime and things can go wrong. I’m happy with them now, but that could change.’

I looked at some screen caps from “Wild Things” so I could do a side-by-side before and after comparison of her boobs. And frankly, there is no comparison. Her first doctor should’ve gotten a noble prize for medicine, because she was damn near perfect before.

Web articles – via partners/network co-ordinators. This website and its contents are the exclusive property of ANGA Media Corporation . We appreciate your feedback and respond to every request. Please fill in the form or send us email to: [email protected]
Previous: Phthalate exposure in pregnancy may increase preterm birth risk : Study
Next: Nicole Richie breast augmentation : Actress Got a Boob Job