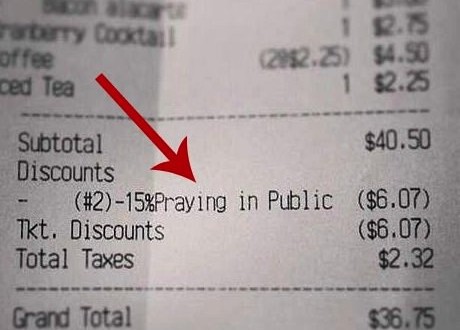 Diner gets rid of prayer discount

A Winston-Salem diner is no longer offering a 15 percent discount for praying in public after making national headlines over the last few days.

The Freedom From Religion Foundation accused Mary’s Gourmet Diner in Winston-Salem of discriminatory promotion by favoring patrons who chose to pray, meditate or say thanks before eating, Fox 8 News reported.

In a letter to the restaurant’s owner, Mary Haglund, foundation attorney Elizabeth Cavell said the “restrictive promotion practice” denied “full and equal” treatment to all the restaurant’s diners.

“Any promotions must be available to all customers regardless of religious preference or practice on a non-discriminatory basis,” the letter said.

Haglund said she never promoted the discount, but that word spread quickly when Christian recording artist Dan Bremnes posted a comment on his Facebook page after he received 15 percent off his bill for praying over his meal at the diner, the Fox affiliate reported.

Concerned about a possible lawsuit, Haglund posted a note on the diner’s door informing customers that the discount would no longer be offered.

“We at Mary’s value the support of ALL our fellow Americans,” the note said. “While you may exercise your right of religious freedom at this restaurant by praying over your meal to any entity or non-entity, we must protect your freedom from religion in a public place. We are no longer issuing the 15% praying in public discount. It is illegal and we are being threatened by lawsuit. We apologize to our community for ANY offense this discount has incurred.”

Web articles – via partners/network co-ordinators. This website and its contents are the exclusive property of ANGA Media Corporation . We appreciate your feedback and respond to every request. Please fill in the form or send us email to: [email protected]
Previous: Swedish eel dies at 155
Next: Drinking More Coffee Could Cut Tinnitus Risk, Study