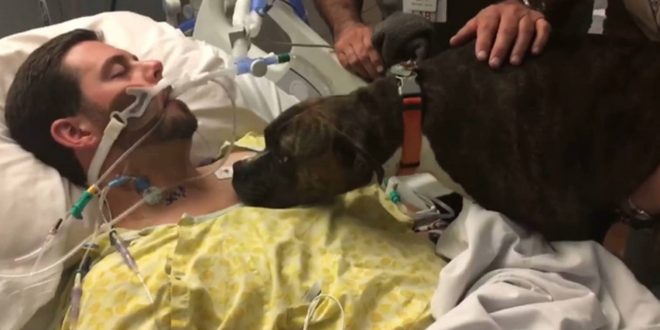 A heartbroken family have shared the moment a devoted dog was allowed into hospital to say goodbye to her dying owner.

Ryan Jessen, 33, suffered a brain hemorrhage last month after what he thought was a simple migraine.

During Jessen’s final moments, his loved ones gathered around his hospital bed to say their goodbyes. The hospital even allowed his four-legged friend, Mollie, in the room to say goodbye.

Jessen’s sister, Michelle, captured the heart-wrenching moment on video and posted it to Facebook. The video has since gone viral with more than 12 million views and over 100,000 shares.

“The hospital did the sweetest thing for us and allowed us to bring my brother’s dog in to ‘say goodbye’ so she’d know why her human never came home. If you knew my brother, he really loved his sweet dog.

So many people have asked — He thought he had a migraine, but it was a ventricular brain hemorrhage. They think it was brought on by high blood pressure, and there’s speculation that his frequent consumption of energy drinks may have contributed.

THANK YOU to everybody for the outpouring of support, but I won’t be responding anymore. We are sincerely touched and humbled by others’ stories, their sharing in our sadness and the kindness of so many people.

Don’t worry about the dog! We’re keeping her!!! She’s part of the family.”

Melissa later added that Ryan’s unfortunate death will help another person. She says his heart was donated to a 17-year-old boy in California.

She wrote, “As sad as it is to lose Ryan, we know his heart is going to bring so much joy to the family of the recipient. I wish Ryan could know what a difference his heart will make for that young man.”

Web articles – via partners/network co-ordinators. This website and its contents are the exclusive property of ANGA Media Corporation . We appreciate your feedback and respond to every request. Please fill in the form or send us email to: [email protected]
Previous: Canada new housing prices rise in 2017
Next: Even one cigarette a day is deadly, finds new research