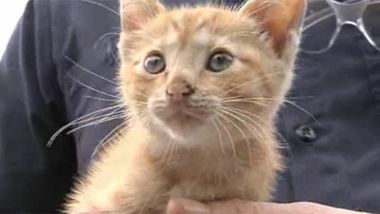 driver heard a cat's scream under hood after trip to Florida

Tallahassee, FL – A Georgia woman drives from Cairo to Tallahassee with a passenger that she didn’t know she had.

“He’s a Cairo cat and he hitched a ride all the way to Tallahassee.” Says Curtis White.

White says a little kitten rode in of his co-worker’s car — under the hood.

“This little guy was hopelessly stuck down into this part of the car just inches away from turning belts, fans, and everything else bad. He was just scared as heck.” He says.

White says his co-worker heard a cat’s scream when she stopped at a gas station during her some 50-mile drive from Cairo, Georgia to Tallahassee, but, she didn’t know where the sound was coming from.

He says once she made it to work Thursday morning, she took the car to White, who’s a mechanic.

White says, “Me and Nicole here opened up the hood and realized that there was a baby kitten in there. So, we just scooped them out of there and gave him some love and some milk and some sausage.”

White says the several days old kitten was found near the car battery.

“In there is called the fender well. As you can see, it’s very tight spaces and probably loud and scared this cat half to death, I’m sure. He’s probably down to about seven lives now.” White describes.

The kitten no longer has to worry about hiding underneath a car hood. One of the woman’s co-workers has decided to adopt him.

“He definitely got lucky, that’s for sure.” White says.

White says his co-worker had no idea where the cat came from or how it got in her car.

Web articles – via partners/network co-ordinators. This website and its contents are the exclusive property of ANGA Media Corporation . We appreciate your feedback and respond to every request. Please fill in the form or send us email to: [email protected]
Previous: Schmitt family found gold chains, five gold coins and a gold ring
Next: Stress can lead to sleep-texting : You’re not dreaming