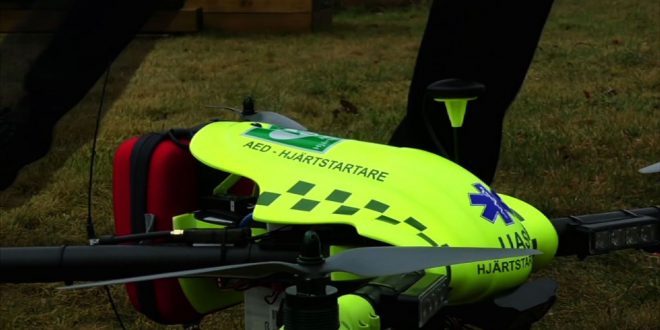 New study from the Centre for Resuscitation Science at Karolinska Institutet and Stockholm South General (Söder) Hospital in Sweden shows that a specially constructed drone equipped with a defibrillator can be dispatched by alarm and delivered automatically to the site of a cardiac arrest long before an ambulance arrives.

A new study published this week in JAMA shows that a drone hauling an automated external defibrillator drastically reduced emergency response times by an average of 16 minutes for simulated out-of-hospital cardiac arrest cases.

Out-of-hospital cardiac arrest in the United States has a low survival rate of between 8% -10%, so reducing time to defibrillation is a critical factor for increasing survival. A 12 lbs. drone with a 1.7 lbs. AED attached was used in this study, which was conducted in Sweden.

The drone was activated by a dispatcher and sent to an address provided by a 911 caller so that bystanders could use the device, said study lead author Andreas Claesson, RN, of the Karolinska Institutet in Stockholm.

Claesson said it’s not clear if drones can reduce response times in real-life situations. To get a comparison with traditional emergency medical services response times, a drone was placed at a fire station in a rural setting outside of Stockholm.

The drone, which cost about $20,000, was equipped with a global positioning system, a high-definition camera and integrated with an autopilot software system. It was sent to locations where OHCAs had occurred between 2016-2014 and within a 6.2-mile radius from the fire station.

The drone used in the study has a range of more than nine miles, and is capable of speeds of up to 45 mph, Claesson said.

The drone arrived more quickly than EMS in all cases with a median reduction in response time of 16:39 minutes, the study found.

Claesson and his colleagues acknowledged that the study is limited because the drone flew less than 20 routes of short distances and in good weather. Still, they said the findings warrant further investigation.

“Saving 16 minutes is likely to be clinically important. Nonetheless, further test flights, technological development, and evaluation of integration with dispatch centers and aviation administrators are needed,” the study authors wrote. “The outcomes of OHCA using the drone-delivered AED by bystanders versus resuscitation by EMS should be studied.”

“The technology is here,” he said. “The cardiac arrest case is easy to understand and a drone may transport anything. We have shown that in certain areas the timesaving of a drone system as compared to EMS. It’s rather the mindset that needs to change. Manned aircraft needs to adapt to unmanned not just the other way around.”

Claesson conceded that the flight proficiency and licensure for the drone’s operators “requires a lot of training” and that the drone pilots also spent a lot of time before the test preparing flight routes and identifying flight corridors. The use of drones also could be hindered by flight restrictions and local ordinances in some areas, he said.

Web articles – via partners/network co-ordinators. This website and its contents are the exclusive property of ANGA Media Corporation . We appreciate your feedback and respond to every request. Please fill in the form or send us email to: [email protected]
Previous: London Fire: At Least Six Deaths Confirmed, Dozens Hospitalized
Next: Three dead in house fire on Hamilton’s east mountain