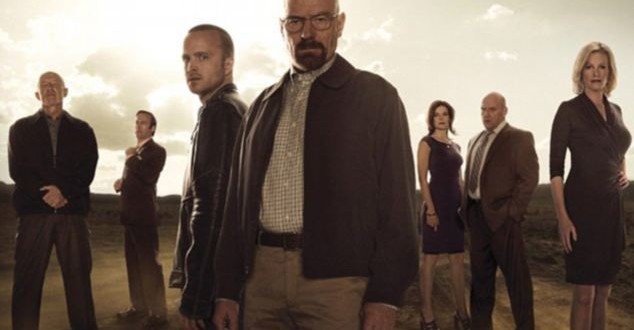 For most viewers, Breaking Bad’s mid-season premiere on Sunday, Aug. 11 was an intense episode, to say the least. But for the Cordascos of Calabasas, CA, the episode was also heartbreaking. The show was dedicated to their 16-year-old son Kevin Cordasco, a huge fan of the series who succumbed to neuroblastoma in March after a long battle with the rare cancer.

Impressed with Kevin’s attitude and understanding of the show, he arranged for other cast members to visit the teenager. Then Vince Gilligan went to visit the Calabasas, California teenager. Gilligan shared star Bryan Cranston’s dread about meeting Kevin. To break the ice Vince brought along the head of Danny Trejo as a gift.

After meeting Cordasco, Vince realised that the boy really understood the show and the show’s main character Walter White. Gilligan arranged for Kevin to visit the Los Angeles based writer’s room and talk to the ones who scripted each episode. There were also plans in place to have Kevin play a cameo role in the show, but health problems made it impossible to do.

Tom Schanauz, a writer/producer of the Breaking Bad, recalled that Kevin’s visit was fun. The teenager was smart and, despite his fatal illness, full of life. But Tom said that Gilligan spent a lot more time with Kevin than the writers did.

It was from his time with Kevin that Vince Gilligan discovered something about his main character. A discovery so important that it influenced the show’s ending. Gilligan said that his first meeting with Cordasco taught him something important about his show. He asked Kevin what he would, personally, like to see on the show.

Kevin’s answer changed the finale that Gilligan had set up for the show. He took what he learned from the teenager and relayed it to the writer’s team. The 16 year-old’s response changed the Breaking Bad finale by inspiring Gilligan and the writers to include part of White’s backstory at the end of the show.

What did Kevin Cordasco want to see?

More about Elliot and Gretchen. He understood their importance to the whole show based on the backstory from season one of Breaking Bad titled Gray Matter. Its where we learn of Walt and Gretchen’s romance and his leaving her and their fledgling company after being bought out for $5000.

The present has Grey Matter worth two billion dollars and Walter’s ex-girlfriend is now Elliot’s wife and they both apparently have the “Midas touch.” The couple offer to pay White’s medical bills. Walt turns them down, but, he tells Skyler they are paying for everything to cover up his meth income.

Walter gets caught out in his lie and when Gretchen demands an explanation, he meets her in a restaurant to explain. While she pushes for an answer, Walter ends the conversation with a hate-filled “F*** you.” Those two words show just how much hate and resentment Walt has kept inside for years about his ex girlfriend and partner.

Kevin Cordasco felt a deep connection with Walter that had little to do with the disease that they both shared. The 16 year-old teenager knew Walter’s inner frustration, his jealousy and sense of outrage at the injustice in his life. He understood how these feelings could mount up to change the man who harboured them. And how they would affect him deeply.

After Gilligan met Kevin, he wanted to pass on the ending of Breaking Bad. Which would make the teenager the only other person apart from the occupants of the writer’s room.

But like any huge fan, Kevin declined the offer and according to Gilligan, he did not hesitate to say no, because he was going to watch it.

Sadly, Kevin Cordasco will never get to watch the finale. He passed away on March 11 this year. But the teenager left his mark. Breaking Bad’s first episode of the final eight, was dedicated to Kevin. But his legacy was part of the penultimate episode Granite State.

The tail end of the episode features a televised interview with Gretchen and Elliot with Charlie Rose. It is this brief spotting of them that brings Walt back from his fugue state of waiting for his arrest. The downplaying of his importance to their billion dollar company hits Walt where he lives.

When the police arrive at the bar, Walt has left the building and it looks like he may be going to see his two former associates. Is White going to pay his former “friends” a Heisenberg visit? We don’t know.

But however things turn out, the inclusion of Walter White’s former girlfriend and business partner at the end of Breaking Bad is courtesy of the late Kevin Cordasco. A devoted fan who understood the motivations of White and inspired the show’s finale. A 16 year-old boy who understood the deeper feelings of the fictional character who shared his disease. And a fan who shared his interest, and understanding, with other fans the world over.

Web articles – via partners/network co-ordinators. This website and its contents are the exclusive property of ANGA Media Corporation . We appreciate your feedback and respond to every request. Please fill in the form or send us email to: [email protected]
Previous: Helen Mirren plays queen for young boy : (PHOTO)
Next: Kelly Clarkson : Singer visits children’s hospital in Vanderbilt