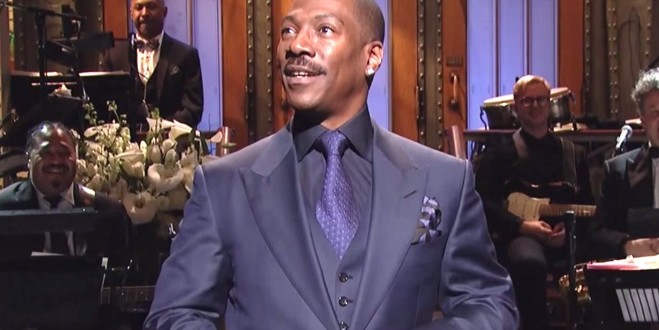 Comedian Norm Macdonald had written Murphy a part in a sketch that was conceived to give the early ’80’s “SNL” star one of the biggest laughs of a star-studded evening. After the highly-rated TV special came and went, Macdonald took to Twitter to explain Murphy’s refusal … in a good way. “He will not kick a man when he is down,” Macdonald tweeted.

“I totally understood,” Murphy says in a new interview with The Washington Post. “It was the biggest thing in the news at the time. I can see why they thought it would be funny, and the sketch that Norm wrote was hysterical.”

The Cosby joke was to take place during an “SNL” institution: Celebrity Jeopardy. Murphy was asked to appear in a signature Cosby sweater, mischievously mixing a drink. But the “Beverly Hills Cop” star refused multiple attempts to talk him into it.

“It’s horrible,” Murphy says about the Cosby accusations. “There’s nothing funny about it. If you get up there and you crack jokes about him, you’re just hurting people. You’re hurting him. You’re hurting his accusers.”

“I was like, ‘Hey, I’m coming back to ‘SNL’ for the anniversary’,” he insists. “I’m not turning my moment on the show into this other thing.’ ”

Web articles – via partners/network co-ordinators. This website and its contents are the exclusive property of ANGA Media Corporation . We appreciate your feedback and respond to every request. Please fill in the form or send us email to: [email protected]
Previous: Discovery made on how the brain prevents dehydration, study
Next: Joan Leslie: ‘Yankee Doodle Dandy’ Star, dies aged 90