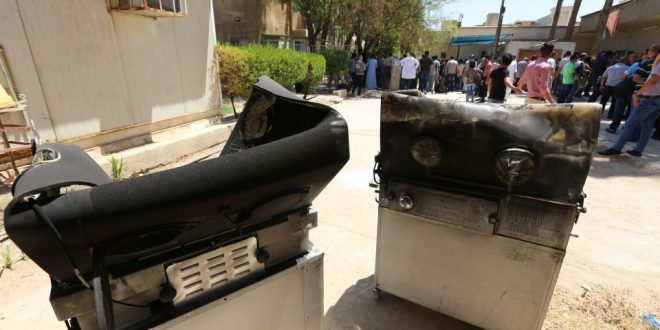 A fire at a maternity ward killed 11 prematurely born babies when it ripped through a hospital in Baghdad overnight.

At least seven other children – including three suffering from smoke inhalation – and 29 women were also rescued from the Yarmouk Hospital and transferred to another site.

“I only found charred pieces of flesh,” father-of-two Hussein Omar cried after searching for his week-old twins.

Omar, 30, welcomed twins – a boy and girl – into the world last week. Having heard about the fire, he raced to the hospital only to be told by authorities to go to another Baghdad hospital, where many of the children and their mothers were moved to after the fire.

But he could not find his children anywhere, so returned to the teaching hospital, where staff told him to go to the city’s morgue.

“I want my baby boy and girl back,” he told the Associated Press. “The government must give them back to me.”

Two of the mothers caught up in the fire are in critical condition. Scattered reports indicated the death toll may rise, and that several members of staff are among those injured.

Eshrak Ahmed Jaasar, 41, is also searching for missing relatives. Her four-year-old nephew was being treated at the hospital and while his mother has been found there is no sign of her nephew.

“We pay the hospital employees thousands of Iraqi dinars to allow us in to get our loved ones basic food and milk, which they cannot provide,” Jasaar told AP. “It’s a corrupt government that doesn’t care about its citizens and lets this happen.

Ahmed al-Rudaini, a spokesperson for the government ministry of health, said the fire broke out in the women’s lounge of the hospital in the early hours of Wednesday morning.

The hospital was sealed off as forensic teams shifted through the debris of the partially destroyed building. Outside, distraught parents gathered to demand answers.

The fire was started by an electrical fault, according to al-Rudaini. These faults are common in Baghdad, where poor wiring and lack of maintainance can often result in electrical fires.

Web articles – via partners/network co-ordinators. This website and its contents are the exclusive property of ANGA Media Corporation . We appreciate your feedback and respond to every request. Please fill in the form or send us email to: [email protected]
Previous: Christie Brinkley And John Mellencamp Break Up After One Year Together
Next: Concentration camp suspects identified, Report