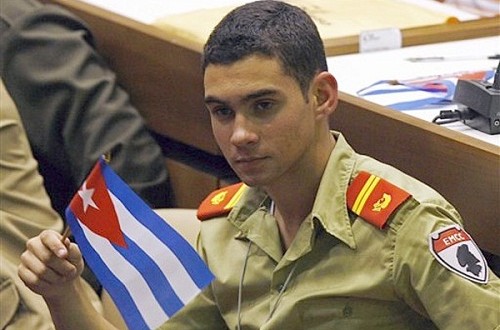 This April marks the ten-year anniversary of when Elián González was forcibly removed from the home of relatives in Miami and returned to his father in Cuba. The Cuban propaganda machine, ever aware of the symbolism of Elián, has no qualms about exploiting the boy, now 16, when it serves the regime’s purpose.

The AP reports the government released today the above photo of González — wearing a Cuban military school uniform while attending a Young Communist Union congress — under the headline “Young Elián González defends his revolution in the youth congress.” González is no stranger to being celebrated in Cuba. His father was appointed to the parliament and still serves, and the boy’s December 7 birthday is marked with parades and celebrations every year.

Elian, who today became a teenager, still had to “celebrate” his birthday party in the presence of two “viejos cagalitrosos,” the new dictator-in-chief and Ricardo “Watermellon Head” Alarcon.
Can you imagine? A teenager having to salute these two sinister characters on his birthday, after having been forced to do the same with Cuba’s mass murderer for the last six years?
Poor Elian! I wonder if Janet Reno remembered to send him a birthday card.

Web articles – via partners/network co-ordinators. This website and its contents are the exclusive property of ANGA Media Corporation . We appreciate your feedback and respond to every request. Please fill in the form or send us email to: [email protected]
Previous: Shawn kemp opens oskar’s kitchen : Photo
Next: Jamie Lynn Grumet Pathways To Family Wellness Magazine