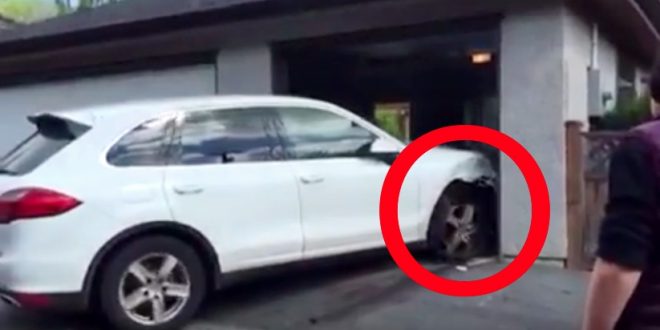 It’s bad enough having video your own parking job put up on social media and slammed as one of the worst ever, but things just got even worse for the Vancouver teen who was driving the luxury vehicle.

Police say they got a call on June 16th about a White Porsche Cayenne that hit a parked car on 32nd Avenue between Oak and Granville Streets. No one was hurt and a few days later investigators got the video footage from ICBC.

The driver has now been charged with several Motor Vehicle Act offences.

“He’s 16-years-old. He has no driver’s license. It’s not his car, he took it without permission. It was obviously a bad decision for him to take a car without a license. He sort of seemed to make one bad decision after the next and it resulted in a collision. Had he just stayed at the accident scene and dealt with that collision, he likely would have just received a $276 ticket and the car would have been towed,” explains Constable Brian Montague.

“We do see unlicensed drivers throughout our normal course of pulling people over. Like I said, for the most part it’s a $276 ticket. There’s a reason these people don’t have drivers licenses’ and that’s the concerning part. We’re very lucky in this case the 16-year-old didn’t hit and kill somebody, especially after the first collision he got involved in.”

Montague adds if the driver wants to get his license, the Superintendent of Motor Vehicles has the ability to deny that request.

ICBC says the teen isn’t able to file a claim because he’s unlicensed.

Web articles – via partners/network co-ordinators. This website and its contents are the exclusive property of ANGA Media Corporation . We appreciate your feedback and respond to every request. Please fill in the form or send us email to: [email protected]
Previous: Television Academy Sues to Block Sale of Whitney Houston’s 1986 Emmy
Next: NASA to Assess 2nd Ground Qualification Test for SLS Rocket Booster, Report