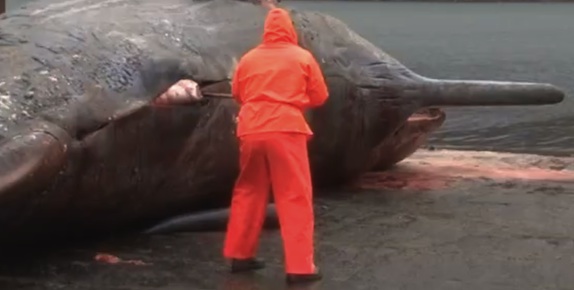 Exploding whale video - not a story for lunchtime viewing

Exploding whale video : not a story for lunchtime viewing!

This sperm whale from the Faroe Islands exploded at the worst time possible.

This whale had been dead for some time and the decomposing gasses in its body built up as it continued to rot from the inside out.

So here’s the story: A sperm whale washed up on a beach in the Faroe Islands, which is about halfway between Norway and Iceland. The whale is believed to have died of natural causes after being stranded with two other whales. After being left for a couple days, its intestines began to ferment and rot, and when this brave soul tried to open its stomach, a large gas pocket erupted and led to the GIF above, which is probably best not scratched and sniffed.

Web articles – via partners/network co-ordinators. This website and its contents are the exclusive property of ANGA Media Corporation . We appreciate your feedback and respond to every request. Please fill in the form or send us email to: [email protected]
Previous: Washington : “Puppy” dog found after nine days under rubble (VIDEO)
Next: Twerking on Subway Tracks : Two girls twerk in death-defying viral video