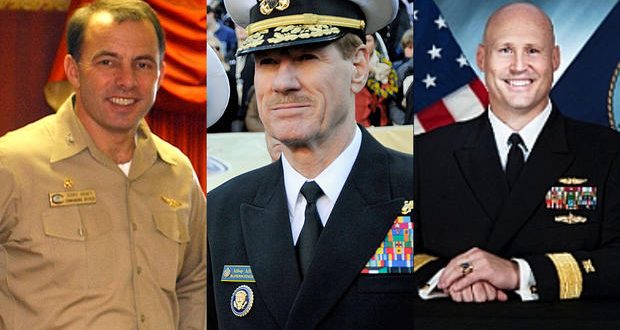 The “Fat Leonard” Navy bribery scandal continued to grow Friday, with charges being filed in Virginia and San Diego against three current and former officers accused of divulging inside information about Navy operations and arranging special diplomatic clearances in exchange for gifts, entertainment and prostitutes.

The charges were made in connection with the case against Leonard Francis, the former CEO of Glenn Defense Marine Asia (GDMA), who admitted bribery charges last year.

GDMA has serviced US Navy ships in Asia for 25 years and Francis is accused of overcharging the Navy for goods and services by an amount that exceeded $30 million.

He has admitted to providing Navy officers with an exhaustive list of gifts, including paying for prostitutes, concert tickets and luxury hotel suites in exchange for classified information that helped his company carry out the scheme, according to the AP.

Francis, also known as “Fat Leonard,” had allegedly recruited two moles within the US 7th Fleet and the Naval Criminal Investigative Service who alerted him when naval auditors tried to investigate suspicious business transactions with the GDMA.

His cousin Alex Wisidagama, the global manager of GDMA, was sentenced to five years in prison after pleading guilty to a fraud scheme that overbilled the maritime branch by more than $34 million.

In one case, he admitted that the company charged $2.7 million for servicing the USS Mustin during a port visit to Thailand in 2011, while more than $1.5 million of the final bill was fraudulent charges.

Ten people, including several Navy officers, have been charged in the case and all but one has pleaded guilty to their charges.

Earlier this year, Commander Michael Misiewicz became one of the highest-ranking Naval officers charged in the case, pleading guilty to bribery and diverting ships to Asian ports where the company either owned the port or the port had lax oversight, allowing the GDMA to inflate prices.

The Navy has cancelled all contracts with the GDMA. Several admirals have also been suspended over the case while some others were forced into retirement after accepting gifts from Francis.

Web articles – via partners/network co-ordinators. This website and its contents are the exclusive property of ANGA Media Corporation . We appreciate your feedback and respond to every request. Please fill in the form or send us email to: [email protected]
Previous: Alabama Woman killed by fire ants day after her mother dies “Report”
Next: TTC investigating moving subway with doors open (Video)