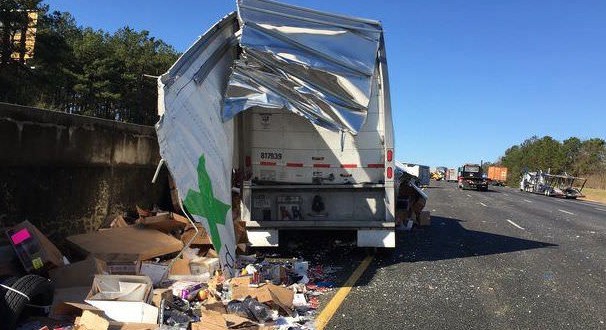 FedEx truck accident second in two days in run-up to Christmas, You mail a package and you expect it to be delivered, but some packages took a detour in Georgia on Tuesday morning.

Items people mailed were scattered all over Interstate 75 after the FedEx truck carrying them overturned around 10 a.m.

A couple of hours after the wreck, northbound traffic inched along in two right lanes, and spectators watched from the Simmons Road bridge. Some debris spilled onto the southbound side of the median.

Lewis May, who drives a wrecker for Buice’s Garage in Forsyth, collected scattered Redbox DVDs in a broken cardboard box.

May said he’s seen similar wrecks, but this truck was carrying a lot of valuable cargo.

“The most valuable thing I’ve probably seen is a lot of laptops,” May said.

Deputies left the scene about 3 p.m. and Department of Transportation employees handled the situation with FedEx Ground from there, said Allison Selman-Willis, public information officer for the sheriff’s office.

“It’s a mess,” Selman-Willis said. “I have no idea how they’re going to sort it out, because boxes were smashed open.”

“All the cargo will be examined for damage,” Bull said. “(FedEx) will go through every package (and) every item. … What customers can do is track their packages on FedEx.com or call 1-800-GoFedEx, and if they have any issues with their packages, they can contact their shipper, and their shipper can work with FedEx.”

The truck was traveling from Orlando, Florida, to Kentucky, Bull said.

Web articles – via partners/network co-ordinators. This website and its contents are the exclusive property of ANGA Media Corporation . We appreciate your feedback and respond to every request. Please fill in the form or send us email to: [email protected]
Previous: Hannah Overton : Texas woman free on bond in salt poisoning case
Next: Mid-air brawl – Video: Crying Baby Leads to Giant Midflight Brawl