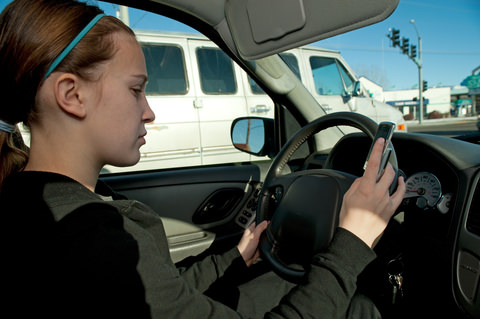 A new study from the University of Regina suggests that teens are not texting and driving as frequently anymore.

Research involving teenage drivers primarily in Ontario has found a decline in the frequency of texting and driving.

“The good news is that we found a significant drop in the percentage of youth who reported “sometimes” to “almost always” texting and driving, from 27% in 2012 to 6% in 2014,” says the study’s lead author Dr. Sean Tucker, University of Regina.

“We also examined teenagers’ risk-taking behaviours while driving including texting, speeding and talking on a phone,” noted Tucker. “Unfortunately we found that while texting and driving occurred less frequently than speeding or talking on the phone, these behaviours were closely associated with each other. In other words, those who texted and drove were also more likely to speed or talk on the phone while driving.”

While males were more likely to text and drive than females there was no difference in the rate of males and females who talked on a phone while driving.

As part of the study, Sean Tucker and co-author Simon Pek (Simon Fraser University) analyzed people’s reasons for reducing their frequency of texting and driving. “Some of the reasons why drivers didn’t text and drive included the perceived danger, laws and fines for texting and driving, and experiencing close calls and accidents by other drivers,” says Tucker.

The Prevalence of texting while driving and other risky driving behaviours of young people in Ontario, Canada: Evidence from 2012 and 2014, published in the journal Accident Analysis and Prevention, November 2015, is based on surveys of 6,133 youth in 2012 and 4,450 youth in 2014 conducted by Dr. Sean Tucker, Simon Pek, Jayne Morrish, Parachute Canada, and Megan Ruf, University of Regina, with the support of Parachute Canada.

This year’s National Teen Driver Safety Week, October 19 – 25 recognizes that teen driver safety is a huge issue in Canada. Young people only make up 13% of licensed drivers, but account for approximately one quarter of all road-related injuries and fatalities. Most of these injuries and deaths can be prevented.

According to the Ontario Association of Chiefs of Police a driver using a mobile device is four times more likely to be in a crash than a driver who is focused on driving. The Canadian Automobile Association reports driver distraction is a factor in 4 million vehicle crashes each year. The authors hope that growing societal awareness, more focused government interventions, and continuing research on the problem will help reduce the incidence of risky driving behaviours and their associated consequences.

Web articles – via partners/network co-ordinators. This website and its contents are the exclusive property of ANGA Media Corporation . We appreciate your feedback and respond to every request. Please fill in the form or send us email to: [email protected]
Previous: Bronze Age plague wasn’t spread by fleas, DNA study says
Next: Two teens killed after single-vehicle crash in Vaughan, Four Others In Hospital