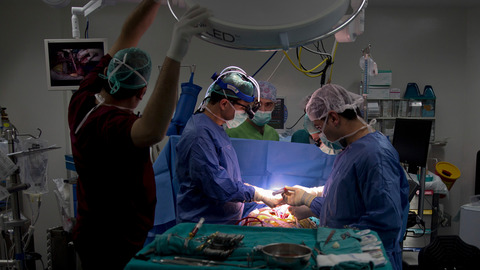 Johns Hopkins surgeons have chosen a soldier to receive the first US penis transplant.

The unidentified man will undergo the operation once the hospital finds a suitable penis from a deceased organ donor.

“These genitourinary injuries are not things we hear about or read about very often,” Dr. W.P. Andrew Lee, chairman of plastic and reconstructive surgery at Johns Hopkins, told the New York Times. “I think one would agree it is as devastating as anything that our wounded warriors suffer, for a young man to come home in his early 20s with the pelvic area completely destroyed.”

To date, there have only been two previous attempts at a penis transplant surgery, a difficult procedure that requires microscopic linkages of nerves and blood vessels. The first ever attempt performed by Chinese doctors in 2006 was a failure. But eight years later South African doctors managed to successfully transplant a penis, after which the patient was able to reproduce.

The penis is not included among the organs doctors are permitted to harvest from an organ donor. Potential matches would only come from suitable donors by special permission from the deceased’s family.

“We’re looking at the age of the patient and certainly the skin color of the patient. Those are the two primary concerns that we have,” said Dr. Richard Redett, a plastic surgeon at Johns Hopkins told Reuters. “You obviously want a donor that has a functioning penis as well.”

Between 2001 to 2013, 1,367 men suffered some form of genital wound as a result of action in Iraq or Afghanistan, according to the Department of Defense Trauma Registry. The Johns Hopkins team is hoping to perform up to 60 such transplants in the future.

Web articles – via partners/network co-ordinators. This website and its contents are the exclusive property of ANGA Media Corporation . We appreciate your feedback and respond to every request. Please fill in the form or send us email to: [email protected]
Previous: Researchers find sounds of deep water animal migration, Report
Next: San Francisco police search for gun lost by agent who ‘left it atop car’