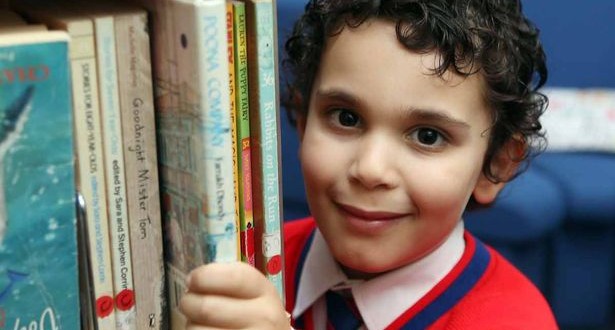 Now, 12 months later, his IQ level has been tested again – and the results put him on a par with Albert Einstein and Prof Stephen Hawking.

Sherwyn’s intelligence levels are way beyond his years.

He has the reading age of a nine-year-old, a mental arithmetic age of an eight-year-old and the spelling abilities of a youngster aged six years, nine months.

“His intellect reaches the highest possible levels of reason and when he talks to you he has the social skills of a much older child,” Congdon said.

While most four-year-olds have not yet started school, Sherwyn is already studying work for eight and nine-year-olds at Rastrick Independent School, Huddersfield. “His mental age is measured at 8 years and 9 months, more than twice his actual age,” said Congdon.

“He is a very happy healthy child and loves to talk,” Sherwyn’s mother, Amanda said. She said Sherwyn has read over 190 books and his favourite is the encyclopedia as he loves learning new things.

The Wechsler Intelligence Scale for Children, developed by American psychologist David Wechsler, is an individually administered intelligence test that can be completed without reading or writing.

Web articles – via partners/network co-ordinators. This website and its contents are the exclusive property of ANGA Media Corporation . We appreciate your feedback and respond to every request. Please fill in the form or send us email to: [email protected]
Previous: New Champ at the Movie Box Office : Hobbit Takes $73.7-M In North American Debut
Next: Michelle Obama: Christmas Talent Show Is Family Tradition (VIDEO)