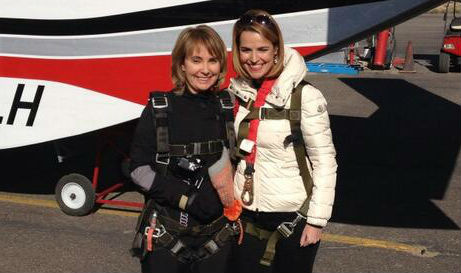 Gabrielle Giffords has completed a skydive jump to mark the third anniversary of the Tucson, Arizona, shooting that left her critically wounded.

The former US congresswoman landed without any injury on Wednesday at a site between Phoenix and Tucson.

After completing her landing – a tandem jump with friend and former US Navy Seal Jimmy Hatch – Ms Giffords blew kisses and waved to a crowd of reporters.

“It’s been step by step since I was shot three years ago,” Giffords wrote on Facebook. “I’ve overcome a lot. Progress has come from working hard. Today, I grieve, I remember, and I take another step. I’m stronger now. I’m winning back movement in my right arm. So I have the opportunity to do something I love: skydiving with my friend, former Navy SEAL Jimmy Hatch. Southern Arizona will look beautiful, peaceful from the top of the sky.”

Giffords was shot alongside 18 other victims in a January 8, 2011 shooting during a meeting in a supermarket parking lot in Tucson, Ariz. Six people were killed in the attack. Giffords resigned from Congress in January 2012 to focus on her recovery.

Web articles – via partners/network co-ordinators. This website and its contents are the exclusive property of ANGA Media Corporation . We appreciate your feedback and respond to every request. Please fill in the form or send us email to: [email protected]
Previous: Cancer death rates decline in US : Study
Next: Kate Middleton : Duchess of Cambridge celebrates her 32nd birthday